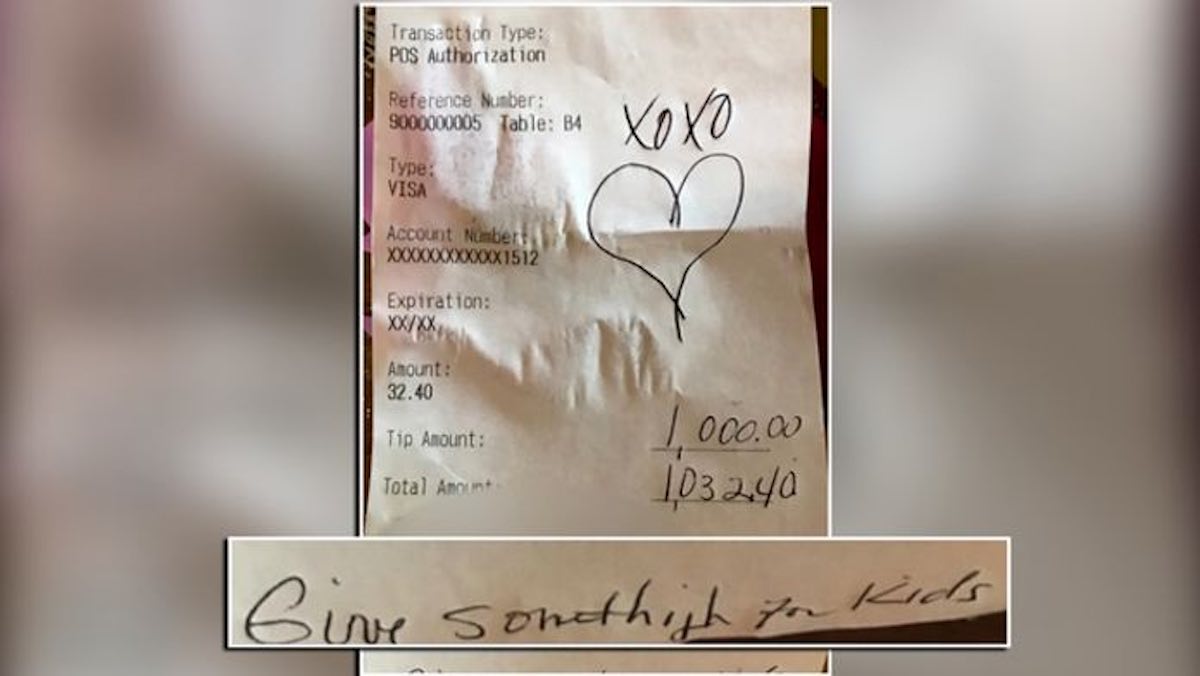 Anna Hofsetter is a single mother who works 3 jobs to help support her two kids – but even though money is tight, she recently used a surprise $1,000 tip to help finance a gift for the community children.

Hofsetter was bartending a slow evening shift last month at the Hotel Nashville in Indiana when she started serving an older couple who was celebrating their wedding anniversary.

She struck up a conversation with the couple only to find that they had gotten married at the Hotel Nashville seven years ago. As the conversation progressed, Hofsetter told the couple how she worked hard to make ends meet for her kids.

Finally, the couple finished their dinner and paid for the $32.40 check. Hofsetter was then shocked to see that they had left her a $1,000 tip along with a note saying “Give something for kids.”

RELATED: Firefighters Pay it Forward Big Time After Waitress With Heart of Gold Picks Up Tab

Taken aback by the kind gesture, Hofsetter remembers telling them: “Thank you, you have no idea what this means to me.”

Even though she had originally been planning on using the money for things like gifts and college funds, Hofsetter knew exactly what to do with the financial windfall after she met Clara Stanley, who is the president of the county’s Enrichment for Teens Association.

MORE: To Repent for Their Part in Patient Hardship, Doctors Team Up to Forgive $1.4 Million in Medical Debt

Stanley and some other kids were gathering donations to help pay for a community teen and skate park in Brown County. Hofsetter knew that by donating $1,000 to the park’s creation, she wouldn’t just be financing a gift for her own kids – it would also be a gift that would serve hundreds of youngsters for years to come.

Stanley was grateful – and surprised – by Hofsetter’s generous donation.

“Brown County has been lacking a healthy, wonderful place [where] little children or youth – especially youth – can go and express themselves, hang out,” Stanley told WXIN. “I know Anna is doing a lot of working hours, single mom. $1,000 is big money.”