Home All News Inspiring Firefighters Pay it Forward Big Time After Waitress With Heart of Gold... 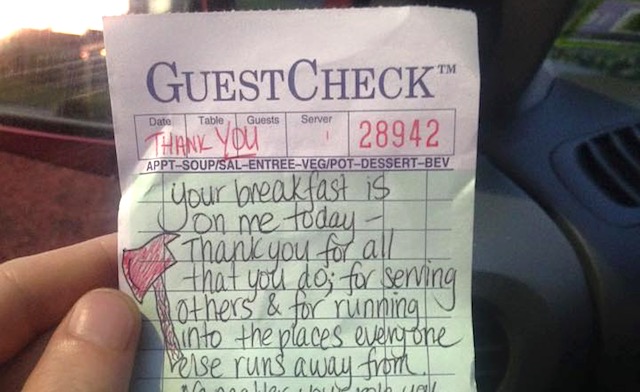 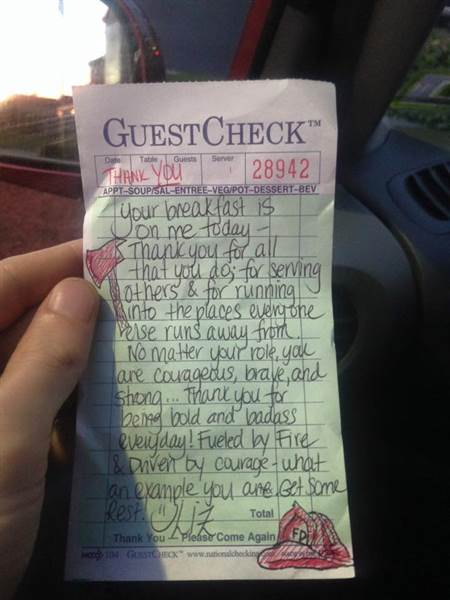 A waitress who did a good deed for a pair of firefighters was overwhelmed when they returned the favor—for her father.

Instead of a bill for their breakfast, Liz Woodward brought a pair of New Jersey firefighters a thank you note. They’d just spent 24 hours battling the blaze at a local warehouse, and the waitress wanted to do something nice for them.

“Your breakfast is on me today,” the note read, along with little drawings of a fire ax and helmet. “Thank you for all that you do.” 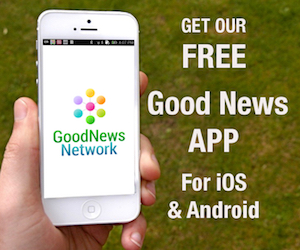 Firefighter Tim Young posted the story and a photo of the note to Facebook, urging people to eat at the diner where she worked. But then, he found out the waitress had a GoFundMe campaign that she was using to raise $17,000 to buy her father a wheelchair-accessible van.

“Turns out, the young lady who gave us a free meal is really the one that could use the help,” Young wrote in another post.

“This is just one example of how so many people in this world have incredible hearts and they pay it forward, so the circle keeps on moving,” Woodward told TODAY.

(WATCH the video below from WPVI News)


Pay This Story Forward By Sharing It…