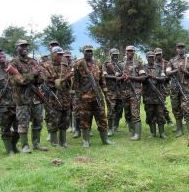 Until the death of this group’s leader in 2010, the South Sudan Democratic Movement was considered the strongest of several militias challenging the central government of Africa’s youngest country, which is searching for stability so it can develop after decades of war with the north.

The group, around 1,800 strong, declared a ceasefire yesterday, accepting an amnesty offered by President Salva Kiir last July when South Sudan gained independence from the north.

“It is our policy to try and absorb all these militia groups into a peace process instead of finding military solutions,” said a government spokesman.