Home All News World At Last, a Year for State Budgets When the Sky is Not... 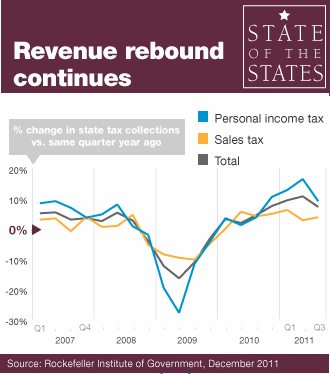 After a four-year run during which states had to close budget gaps of historic proportions, the term “surplus” is finally making a modest comeback in capitals.

According to the Rockefeller Institute of Government, at least 45 states saw their revenues increase over the past year.

Enough economic vital signs are headed in the right direction that the mood in most states is encouraging, and some legislatures will start reversing the most painful of their recent cuts as soon as this year.

In its most recent survey of legislative fiscal directors, the National Conference of State Legislatures reported that more states were “cautiously optimistic” or “positive” about the fiscal outlook for the rest of 2012. The number of fiscal directors who said they were “pessimistic” was zero.

There are asterisks on all this positive news, of course. One is that while state revenues are generally up, they fell so far during the recession that most states have not caught back up to where they were before. “Eight quarters of growth is a good trend,” says Rockefeller’s Robert Ward. “The problem is that states were down so deep that they effectively have lost three years worth of growth.”

Just as the recession did not spread its pain evenly, the economic recovery is not appearing in equal force in every state.

There are states that never really felt the brunt of the recession in the first place. North Dakota is the most obvious example, with its recent oil boom. But many of its neighbors, with economies dependent on minerals or agriculture, are doing well, too. North Dakota is one of a small number of states that anticipates ending this fiscal year with enough money in the bank to cover a tenth of its yearly expenses, according to the National Association of State Budget Officers. The others are Alaska, Delaware, Iowa, Montana, Nebraska, Texas, West Virginia and Wyoming.

On the opposite end of the spectrum are states still wrestling with major budget shortfalls, like California and Washington.

The left-leaning Center on Budget and Policy Priorities issued a report this week painting a more pessimistic budget picture than recent analyses by other groups monitoring state finances. By CBPP’s count, more than half of all states face budget gaps for the year to come or have already closed them. The end of the federal stimulus program, along with increasing K-12 enrollments and escalating Medicaid costs, are still putting massive strains on states. “Even though the revenue outlook is trending upward,” the report says, “states are still addressing large budget shortfalls by historical standards.”

Even some of the states that have had the worst budget struggles, however, are seeing upbeat economic signs. 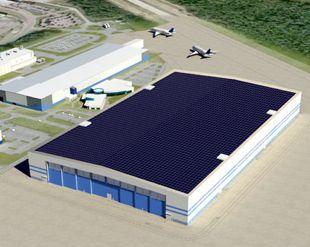 In Washington State, for example, as lawmakers wrangle a budget deficit in Olympia, Boeing is boosting production — and hiring workers — to catch up on a backlog of orders for 4,000 aircraft, or eight years’ worth of work. Microsoft, the state’s other marquee employer, is adding jobs, too. Unemployment claims, while still high, are falling.

Even long-struggling Michigan finally has good news to talk about. After nearly a decade of headlines about job losses and a retrenching auto industry, manufacturing is picking back up. The state’s revenues have improved along with its economy in small but noticeable ways. Tax collections for the state’s two biggest accounts were up 8.6 percent in the last fiscal year. “It feels different for people,” says David Zin, the chief economist for Michigan’s Senate Fiscal Agency. “The changing signs have a pretty significant psychological effect.”

CanagaRetna, from the Council of State Governments, says many signs point to an economy that is near recovery. People are shipping more goods through package companies like UPS and FedEx than they ever have before. Companies have amassed $2 trillion in cash, a higher percentage of the total economy than any time in the last half century. CanagaRetna says that means they will be poised to spend it soon, either on capital improvements or on hiring new workers.

“For the first time in three or four years, I’m a little optimistic on where the economy is going,” he says, “but with the cautious note that states still have some sizable challenges to deal with.”

(READ the full story in Stateline.org)