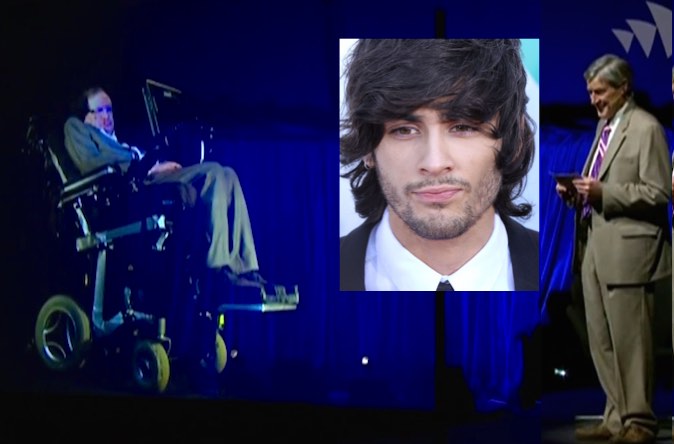 Who says physicists don’t have a sense of humor?

The brilliant Stephen Hawking told a laughing audience Saturday that he’s finally been asked a question about “something important”. Millions of heartbroken teen fans would agree.

While appearing in the form of a hologram streamed from Cambridge, England, Hawking, 73, was asked to reveal the cosmological effect of Zayn Malik leaving the best-selling boy band, One Direction. Without a beat, Hawking reminded the audience to pay close attention to theoretical physics. Dry those tears because Zayn may, in fact, still be a band member–in a parallel universe.

The celebrated English scientist, whose story of being struck with Lou Gehrig’s disease at age of 21 was immortalized in an Oscar nominated film, The Theory of Everything, was speaking to a group at the Sydney Opera House in Australia.

Zayn Malik left the superstar pop band last month after five years saying, “I’d like to apologize to the fans if I’ve let anyone down, but . . . I want to be a normal 22-year-old who is able to relax and have some private time out of the spotlight.”