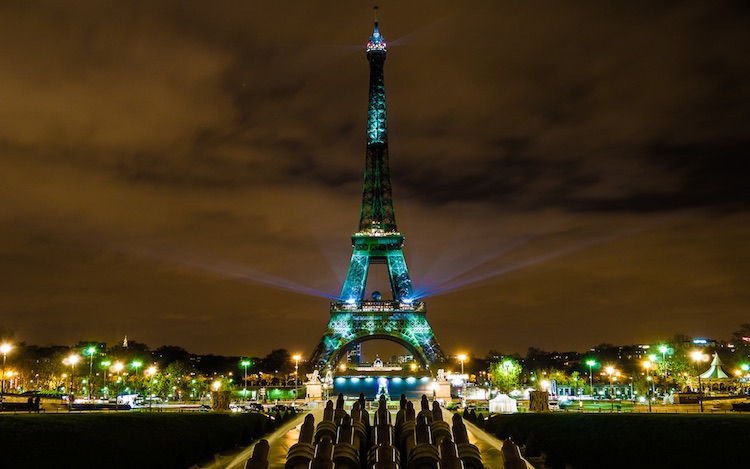 As the Eiffel Tower, a marvel of 19th century engineering, is flooded with green light to salute the opening of the Paris climate change conference, tech giants were unveiling a plan to harness 21st century innovation to reverse global warming.

Bill Gates, Mark Zuckerberg, and Richard Branson are are among 30 of the world’s richest people who are calling for the world to invent our way out of climate change. 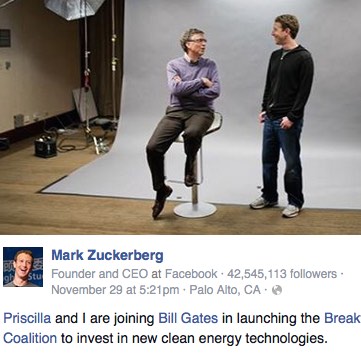 “Solving the clean energy problem is an essential part of building a better world,” Zuckerberg wrote in a Facebook post announcing the coalition. “We won’t be able to make meaningful progress on other challenges – like educating or connecting the world – without secure energy and a stable climate.”

The billionaires say that protecting the global environment through innovation and technology also creates a better economic climate for people around the world.

“If you could change the price of one thing to really lift up the lives of the poorest people everywhere, it would be the price of energy,” Gates says in a video posted at his blog, GatesNotes.

The price of renewable energy has become increasingly competitive with fossil fuels in recent years. New innovations could allow for even cheaper power without greenhouse gases.

Gates has already pledged $2 billion over the next five years to “bend the curve” on climate change and provide the alternative energy sources.

The Breakthrough Coalition announcement comes as 150 world leaders meet in Paris, and 30,000 diplomats and delegates work behind the scenes, to hammer out a climate agreement that for the first time would commit virtually all the world’s nations to a common goal of reining in global warming.

The Paris conference also comes at a time when a swing in American public opinion has shown that roughly two-thirds of Americans support the U.S. signing a global pact on climate change. 75% agreed that global warming is having, or is about to create, a serious environmental impact.

Serving as a backdrop to the discussions of world leaders and billionaires at the climate talks, the Eiffel Tower’s sheen of green this week (see 2nd video below) is also a way for regular citizens to take action. The lighting on the Paris icon is from video projections of trees — a virtual forest.

People can contribute trees, at a cost of $10.62 (10 euros each), which will be planted to combat deforestation and absorb CO2. . . Watch the Reuters videos below.

Wire Your Friends Into This Story, Share It…  Photo: Yann Caradec, CC