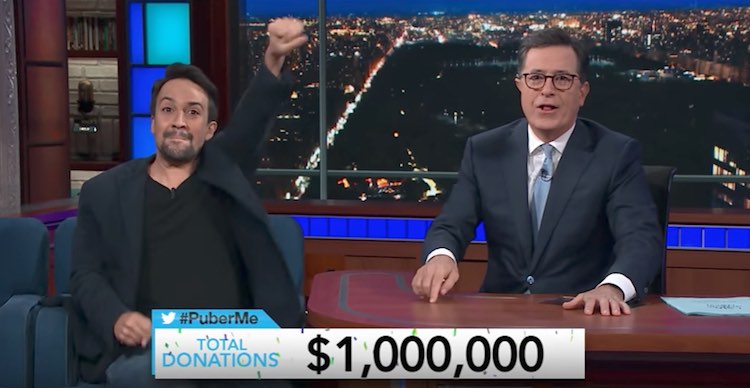 Thanks to an online campaign created by comedian and talk show host Stephen Colbert, social media was flooded with awkward photos of celebrities in their teen years – and the pictures managed to raise $1 million.

During a segment on The Late Show, Colbert and television actor Nick Kroll called on their fellow stars to post pre-pubescent pictures of themselves to social media under the hashtag #PuberMe.

Colbert and Kroll both agreed that for every celebrity who posted an embarrassing teen photo, they would donate $1,000 to Hurricane Maria relief in Puerto Rico.

CHECK OUT: Shakira Built 7 Schools in the Poorest Areas of South America

A whopping 233 celebrities ended up sharing their embarrassing photos to Twitter, resulting in an initial donation from Colbert of $233,000. The host then pledged another $266,000 for the 75,000 awkward photos that were shared by the show’s viewers. After tallying up additional donations from CBS, Nick Kroll, and Colbert’s Americone Dream Fund, the fundraiser was at $999,000.

Lamenting over how they had come up short of $1 million, Colbert remarked: “We came so close, but what can we do? If only we had one more awkward celebrity puberty photo, but we just don’t.”

Then, Broadway heartthrob Lin-Manuel Miranda of the hit musical “Hamilton” leaped onto the stage.

In order to contribute to the campaign, the musician played a video of himself as a young teenager making up a song about Puerto Rico. Colbert was so delighted by the clip, he agreed to contribute the final $1,000.

“That video was absolutely worth $1,000, which means our new grand total is a whopping $1 million,” said Colbert.