Home All News Inspiring Watch Man Propose to His Girlfriend With a Little Help From a... 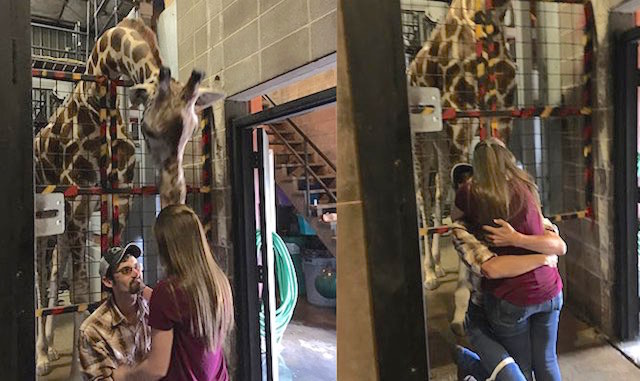 While popping the question may seem like a tall order, it wasn’t too tall for Cody Hall’s friend at the zoo.

When Hall was scheming about how he wanted to propose to his girlfriend, Makayla Blakey, he knew that he somehow wanted to incorporate her favorite animal: giraffes.

He then contacted officials at the Dickerson Park Zoo in southern Missouri who helped him plot out the special proposal.

RELATED: Couple Gets Married on Mt. Everest and, Despite Difficulties, the Photos are Breathtaking

Blakey and Hall arrived at the zoo on Sunday and were told that they were being taken on a special behind-the-scenes tour of the facilities. They were then escorted to an enclosure where Mili the giraffe was waiting for them.

Blakey was told to hold out a branch of leaves for the giraffe – but when Mili bent her head down to snack on the greenery, Blakey spotted a ring dangling from a lanyard around its neck.

Hall then removed the ring and got down on one knee. Needless to say, Blakey said yes.

The zookeepers, who were delighted by the happy occasion, suggested that Mili should also be the couple’s ring bearer for when they tie the knot in the spring.