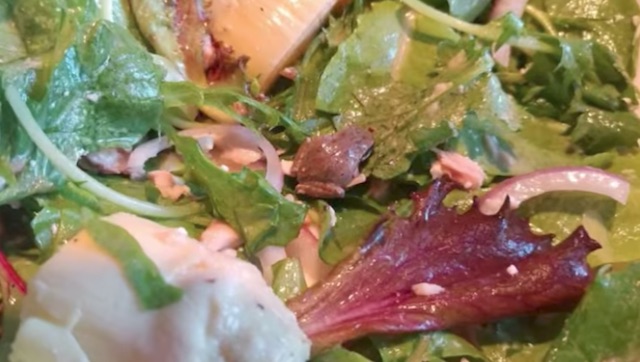 Becky Garfinkel may have lost her appetite because of this store bought salad mix – but she did gain a tiny new friend.

The Corona, California resident says that she was munching on a salad that she had recently bought from a Target store when she saw something hiding amongst the leaves: a frog that was no bigger than a quarter.

37-year-old Garfinkel says that she immediately screamed and ran to the bathroom so she could throw up the salad that she had already eaten. As she was recovering, however, she heard her husband say that the frog was still alive.

WATCH: Hummingbird Refuses to Leave the Dog Who Saved Her Life (WATCH)

Garfinkel’s husband then rinsed the salad dressing off of the amphibian and resuscitated it by rubbing its tiny tummy. Upon inspecting the little salad dweller, Garfinkel and her husband actually decided that it was pretty cute.

After sending complaints to Target and salad greens company Taylor Farms, the vegetarian couple decided to keep the frog and name it Lucky – an appropriate name, considering the circumstances.

Lucky now spends his days in a fancy terrarium in Garfinkel’s office, complete with greenery, moss, and plenty of crickets.

Taylor Farms representatives also say that they are investigating the incident so that no more unsuspecting veggie lovers are given the same sickening surprise.