Home All News Sports Despite Having to Wear a Stoma Bag, This Woman Determinedly Trains and... 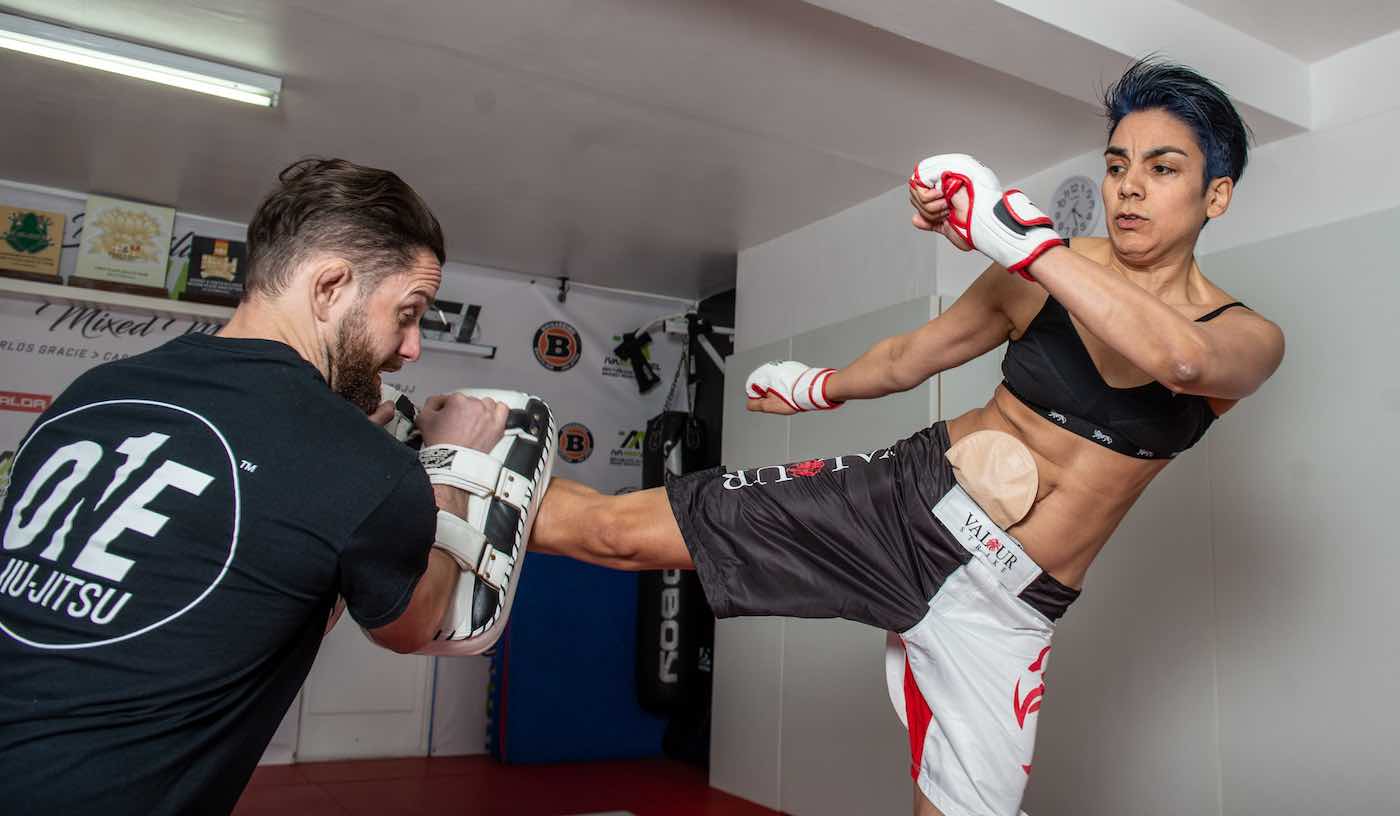 Despite being forced to wear a stoma bag for her Crohn’s disease, this 41-year-old woman is training to be a top MMA fighter.

Kharina Kharran first became fascinated with martial arts after she was introduced to Bruce Lee’s movies at 9 years old. Unfortunately, she was later diagnosed with Crohn’s disease as a teenager.

The condition caused holes to form in her bowel and rectum, and she was left needing dozens of operations. One of Kharran’s operations was so serious, it resulted in her inability to sit down for more than a year.

“For a year and a half, I just had to stand up while I was working. I could not sit down,” says Kharran.

Regardless, she started training at 16 years old – and even though she has undergone 38 bowel surgeries over the years, she has picked up a variety of martial arts.

She says she is now an expert in kung fu, Brazilian Jujitsu, Muay Thai, Jeet Kune Do and boxing – and she has trained for all of them while wearing her colostomy bag.

The bag has forced Kharran to adapt her technique and constantly assess whether her health is at risk. The pouch is positioned on the right side of her body, 2 centimeters across and 1 centimeter down from her belly button, which she tucks into her belt during bouts.

“If I draw attention to it, there may be people out there who want to be aggressive so I choose not to,” says Kharran.

WATCH: 86-Year-old Has Lost 120 Pounds Simply By Walking Around Her One-Bedroom Apartment

“I position myself so that my weakness isn’t obvious and it takes a lot of practice. If I am on the floor in the ab crunch position, it’s a dangerous and vulnerable position for my tummy so I always move and re-position myself.

“When you are fighting, it’s your tummy and your head that are the easiest targets so it is a matter of re-positioning myself and trying to strengthen my other moves because I cannot do the crunches.

“For example, when I do anything standing up, I make sure I am in their face as quickly as possible so they are not on the attack first,” she added. “My elbows drop over my stoma so I am quite lucky that I am protected by them – I don’t have to drop my arms down because they naturally cover the bag. Then if I move my arm down to my thighs, I can protect my whole side.”

Kharran now trains at a martial arts gym six times per week. Since she became strong enough to step into the ring three years ago, the woman from Brighton, England has faced three opponents – and she was delighted to emerge victorious from her third fight earlier this month after she successfully choked out her opponent.

MORE: 78-Year-old Bodybuilder Opens His Home Gym to Youngsters for Free So They Won’t Get Into Trouble

“My biggest achievement was stepping into the cage. I was 100 percent vulnerable,” says Kharran. “I was training six days per week but five days before the event, I couldn’t train because I was unwell.

“I needed to make sure I had done everything I could – and just stepping into the cage, I felt I was a winner already. It felt pretty phenomenal.

“It was just this overwhelming achievement and it made all the suffering I went through worthwhile.”

Kharran says that she also competes in charity events, but she prefers not to disclose her illness to her opponents.

LOOK: Role Model Dad Spurred to Lose 92 Pounds in 5 Months After One Hiking Trip With His Kids

So far, she has taken part in more than 30 full-contact bouts during training and thousands of hours in the cage – but she says she has never been hit in her stoma bag during a match.

“I have never had it hit in a fight but I was hit at the side of the stoma before during a practice and it really really hurt,” recalls the fighter. “For me, safety comes first and I had to stop and recover – but me and my coach worked on strategy after that and it has never happened again since.”