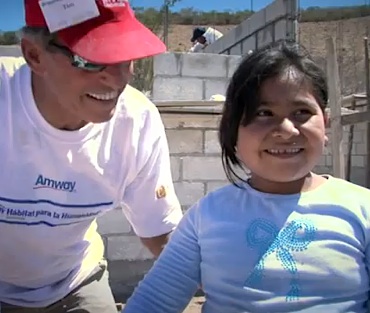 By the end of this week, twelve families in Guatemala will have a home, a direct result of one man’s philanthropic efforts.

For the last seven years, Tim Foley has traveled one thousand miles from his home in Tavares, Florida, to work in a small town in Guatemala constructing houses for low-income families. Not only that, the Amway businessman subsidized the trip for 100 volunteers, and donated $250,000 to Habitat for Humanity to build a community of 40 homes over the next five years. Since 2005, Tim and his team have built 54 homes and for his selflessness, he was recently granted the 2011 Amway Hero Award for Generosity.

“I believe if ‘The Guy In Charge’ lets you make some money, then you ought to do something valuable with it,” says Foley.

Tim’s impact on other people’s lives was lauded by the independent panel of judges invited to choose the winners of the 2011 Amway Hero Awards, which also includes prizes for Patriotism, Leadership and Determination.

WATCH a video about Tim’s generosity, and continue reading about the 3 other winners below…

The annual winner of the 2011 Amway Hero Award for Patriotism devotes himself to reducing suicide and divorce among military families. Mike Schindler, a Navy veteran, founded Operation Military Family, an organization that provides guidance to help military personnel preserve their families, strengthen their marriages, and curb domestic violence and suicide. On average, the company has offered support to 1,500 people each year since 2007.

In another country, the Dominican Republic, Ulises Feliz uses his impressive charisma as a tool to teach business and entrepreneurship to teenagers through Junior Achievement. Discovering talented young adults and coaching them to excel is what earned Feliz the 2011 Amway Hero Award for Leadership.

“I want to be remembered as a person who gave everything possible to help others excel, as someone who stood out as a leader for his aptitude in doing the just thing, and for helping to discover and to develop the talent of others,” he said.

The winner of the Hero Award for Determination was Stephen Willoby, of Waddell, Arizona. He survived a tour of duty in Iraq only to break his neck in a diving accident back home. After nearly dying, the Air Force bomb disposal technician was left with no movement in his legs and no control of his hands. “In the military, we always said, ‘Adapt and overcome.’ That’s all anyone can do in the face of adversity. How you adapt determines how you’re going to live the rest of your life,” believes Willoby, who has become a successful Amway Independent business owner.

Among more than 300 nominated for the Amway awards, the initiatives of these four businessmen were evaluated by a group of professionals whose backgrounds include foundation work, the not-for-profit sector, community agencies and the ministry. Last December, Schindler, Feliz, Foley, and Willoby received the awards to the ovation from a crowd of more than 4,000 Amway Independent Business Owners.

Amway created the Hero Awards program to recognize the efforts of hundreds of its Independent Business Owners who give their time and resources to improve the world. The annual program started in 2010 with prizes of $10,000 awarded  to each of the winners.

READ ABOUT last year’s Amway Hero Awards for 2010 in AchieveMagazine.com