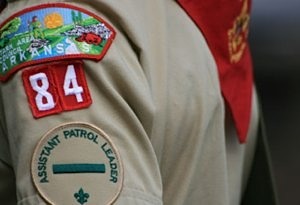 A would-be wallet and iPhone thief trying to make a quick getaway on the streets of Old Town was stymied Sunday when a gang of bicycling Boy Scouts chased down and corralled the suspected culprit before police arrived.

“People don’t ever want to help — everyone just stands there and rubbernecks — but we teach the guys to step up,” said Troop 850 Scoutmaster Barry Wiegmann. “They take an oath to help others at all times. When the suspect pushed a woman and this family into the street as he’s running away, the guys just took off after him.”