Home All News Inspiring Bullied Teen Who Skipped Prom Gets Party of Her Own From 120... 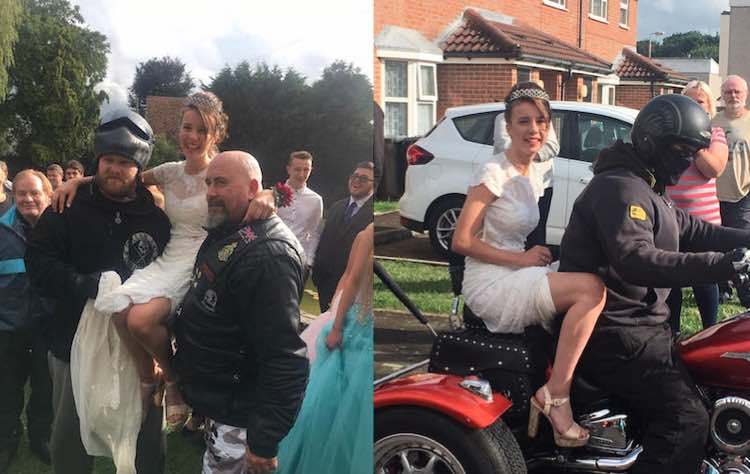 This teen couldn’t bring herself to attend prom when she was being bullied so badly. Instead of a traditional school event, however, she was given a dazzling “biker ball”.

16-year-old Shannon Purcifer suffers from rheumatoid arthritis, bowel disease, celiac, and ulcerative colitis. Students at her Gosport, Hampshire school would bully her relentlessly for her medical issues, to the point where she even had to change her phone number.

So when prom rolled around, Purcifer knew that if she attended the event, she would just end up being miserable.

RELATED: Bullying Rates Have Fallen By Half in the Last Decade – Study

“The night she was supposed to go to her prom she just did nothing. She tried the dress on but it was heart-breaking for her to choose not to go,” Purcifer’s mother Claire Carstens told the New York Post. “She had been looking forward to it for months and we bought the dress as far back as February but the bullying got so bad she knew she wouldn’t enjoy it if she went.

“She agonized over it for a while, but we knew maybe two months beforehand that her heart wasn’t in it. She’d had enough.”

On prom night, Carstens posted a picture of her daughter all decked out in her prom outfit to Facebook with a heartbreaking note.

MORE: Boy Turns the Tables by Inviting His Bully to Pass Out Birthday Cookies Together

“If Shannon had gone to prom tonight she would of worn this beautiful dress. Thanks to nasty vile bullies, Shannon decided she didn’t want to go,” wrote Cartens. “For a girl that has had so much to deal with in life… celiac disease, ulcerative colitis and rheumatoid arthritis, she is one strong young lady with an even stronger mind!!”

The post was so moving, members of the community volunteered to help throw Purcifer a prom of her own.

After a GoFundMe page had raised the necessary funds for the event, the teen’s friends and family all attended the event.

CHECK OUT: Bikers Stop to Help Stranded Motorcyclist Only to Find It’s ‘The Boss’

Even more remarkably, however, 120 leather-clad bikers from the Gosport Scooter Club volunteered to personally escort Purcifer to the event.

Purcifer’s “biker ball” has been widely reported on since the event took place earlier this week – and judging by the photos, it was everything that the college-bound teen could want and more.

“This isn’t all about bad mouthing the school but the school certainly needs to sort out bullying as soon as they are aware of it. This is about showing all those nasty bullies that they won’t win and also showing anyone that is being bullied, there is a light at the end of the tunnel,” wrote Carstens on Facebook.