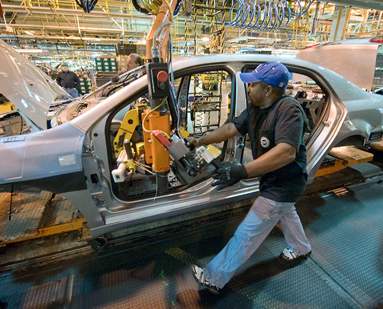 Chrysler’s quest to manufacture its first recyclable car is nearing completion. Experiments have produced an environmentally friendly machine which is low-cost, lightweight, and durable. It is called the Composite Concept Vehicle or CCV.

It is lightweight because it’s made from recycled plastic- which is added to chopped glass (for strength) and rubber (for impact resistance). The body’s weight of 1,200 pounds, less than half the tonnage of today’s smallest Chrysler, contributes to fuel-efficiency numbers of 50 miles per gallon.

The car will be cheap, about $6,000, because the four-part snap-together frame is easy to assemble, and its matte finish would not require the addition of costly paint finishes. (It looks very unlike the shiny, colorful new car of today.)

The initial CCV prototype, the Pronto, was displayed at auto shows in Detroit, and Frankfurt, Germany this fall. The Pronto is aimed at markets in China and India where the most common mode of transport-ation is bicycle. Consumers there can appreciate the low power two-cylinder engine, capable of producing 25 hp. which has a top road speed of 70 miles per hour.

The Pronto has succeeded in passing 3 out of 4 federal safety tests: It has done well in 35-mph head-on collision tests, rollover and roof-crush protection tests, and rear-end collision tests where the durability of fuel tanks were measured. The failure so far has been in side-impact tests.

The quest to produce cheap, durable, recyclable cars was a challenge presented to engineers back in 1993 by Chrysler president, Robert A. Lutz. The first CCVs, whose bodies are 100% recyclable, are still a couple years away from consumers’ garages. (By the time my kids are teenagers!) Source: an article by Warren Brown in the Washington Post