Home All News Inspiring Dad Spends 1,200 Hours Renovating ‘Back to the Future’ Car So He... 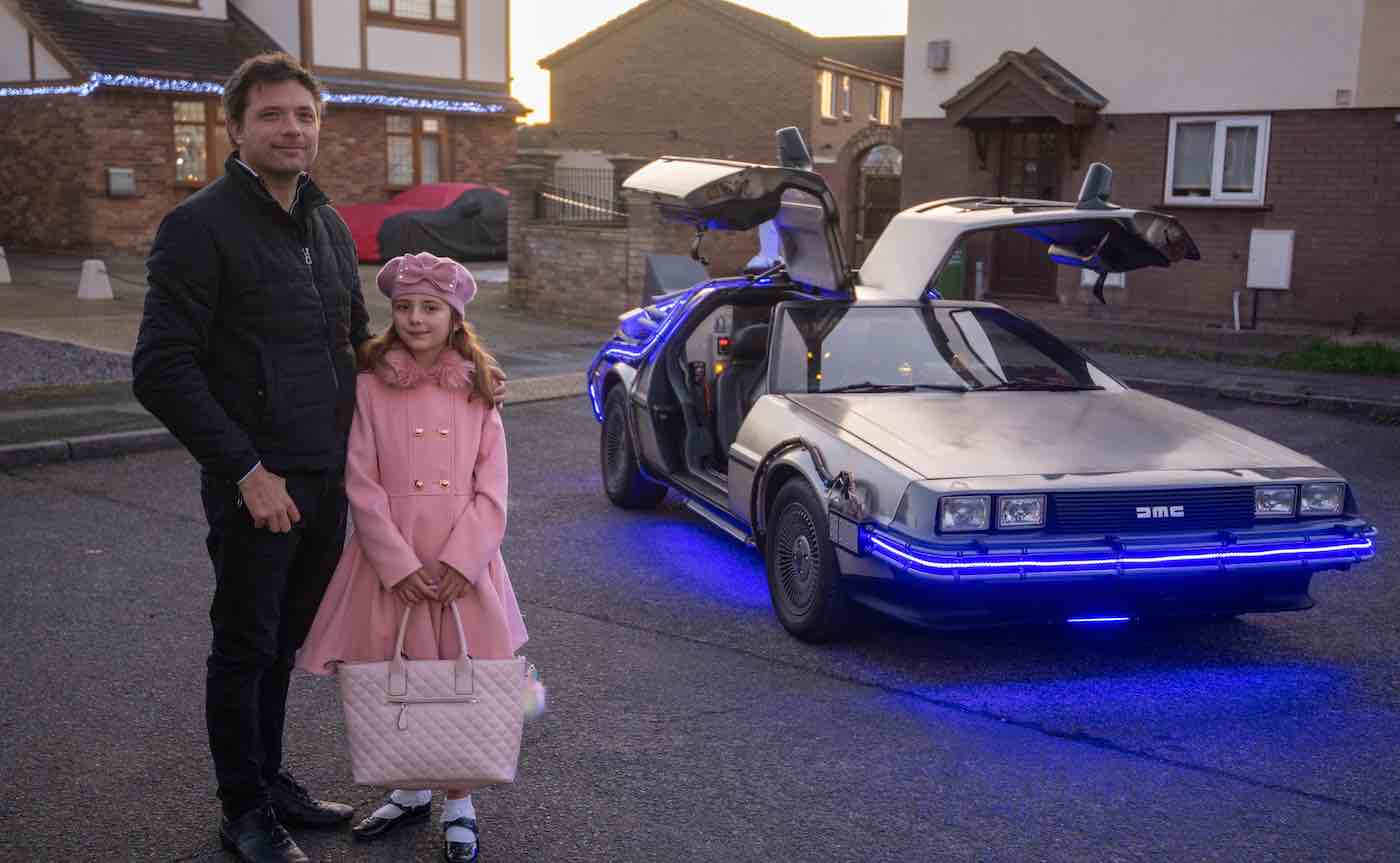 This 37-year-old movie enthusiast may be “the coolest dad ever” since he restored an old DeLorean car from the Back to the Future movies so he could use it to pick up his kids from school.

James Napier spent a fortune transforming the once run-down car to resemble the one featured in the 1985’s movie in which Marty McFly travels through time—and even though some automotive fans might only take out their prized hot rods for an occasional spin, Napier uses it for much more mundane reasons.

Napier says that he takes the car out to pick up his three kids; 16-year-old Paige, 13-year-old Devon, and 8-year-old Daisy, from school every day in the silver motor.

LOOK: Man Transforms His Pub into the Most Festive Bar in All of UK So He Can Raise Money for Sick Children

“I take it out on weekends and I drop my kids off at school or football sometimes. They like it and their friends find it quite amusing!” says Napier. “You see other people’s jaws drop when we drive past. The family adores it—although my wife Emma probably doesn’t want to know how much it has cost me in total to restore!

“We drive it everywhere we go—you’ve got to make the most of it.”

The keen fan said he has also taken the car along to charity events across south Essex.

“We take the car to all sorts of things,” says Napier. “We’ve been to charity events in Pitsea, Stock and Wickford. People love to see it and constantly want a picture with it.

“When we posted on Facebook that we had bought it, loads of people messaged me and asked me to take their kids out in it.”

His daughter Daisy said she loves it when people beep at them when they drive past.

“It’s really cool. Dad is probably a bit crazy to build something like that!” says Daisy.

Napier, who works as a a website designer from Wickford, Essex, has spent the last five months bringing the iconic car back to life after buying it for £55,000 back in June.

When he first got the car, he admits it was a bit of a mess because someone had already tried to convert it into the iconic Back to the Future car.

“It was quite run down. It needed a lot of work,” says Napier. “Somebody had tried to make it into a Back to the Future car—but it was really quite bad! The car was an absolute mess. I was completely nuts.

CHECK OUT: Need to Escape Reality? This Dr. Seuss Exhibit Takes You to Another World

“I thought maybe I could salvage some of it, but in the end I needed to get rid of everything and start from scratch,” he added. “I probably spent around 1,200 hours working on the car and it was quite expensive to do. It was a seven days a week job.

“It might have took a while, but it’s definitely worth it.”

His extraordinary left-hand drive car has become the talk of the town and he said people flock just to catch a glimpse of it.

“I like it because it reminds people of their childhood. I love the film and I’m glad I’ve brought it to life for people,” says Napier. “It’s a fully functioning car. It’s passed its MOT and it runs like a dream.

“There’s only one other like it in the UK. It’s really rare and one of a kind. It was a once-in-a-lifetime opportunity to buy it. It was one of my childhood dreams to have one.

“I wanted to try and get as many things from the films into my car. There’s a few relays in there that have come from the actual car,” admitted Napier. “My wife wanted to get me something from the Back to the Future films for Christmas a few years ago and she bought me these relays which were used in one of the original cars from the film.

“They were in a cabinet just on display, but when I started working on the car, we put them back in where they belong.

MORE: Seniors Celebrate Grandson’s Birthday By Dressing as His Favorite Movie Characters—and the Results Are Adorable

“We have a smoke machine inside the car too so when you open the doors smoke comes out so it’s like you’ve travelled in time. A lot of the props inside makes the exact same noises. We’ve got the iconic car doors and lights too.

“It usually costs around £30,000 to do up these sort of cars from the bottom up,” added Napier—but despite the extraordinary modifications, it only cost James an extra £20.00 to add the car onto his existing insurance policy.