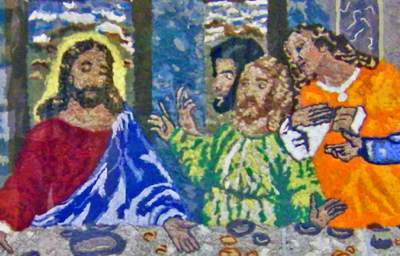 Creative inspiration can come from many sources, but the lint from your clothes dryer? Colored lint collected from a dryer screen became the media with which Laura Bell of Roscommon, Michigan created a 14-foot replica of Leonardo da Vinci’s Last Supper.

She was aiming for the quarter million dollar prize offered in a Grand Rapids art contest, but instead, her fuzzy masterpiece was bought by the people at Ripley’s Believe It Or Not! for display in one of the company’s 32 “odditoriums” around the world.

Bell estimates she spent 700-800 hours just doing laundry to get the lint she needed. But over the seven month period, she was usually seeing the same color. She ended up buying towels in various colors, searching for just the right orange for Philip the apostle, and washing and drying them separately to get lint with just the right tint.

The amateur artist says she’s thrilled by the response from people who have seen it, and the prospect of millions more seeing it via Ripley’s.

“For some people, it’s a very spiritual experience,” said Bell. “Others are simply amazed at what someone could do with basic laundry lint.”

Bell was inspired by a laundry lint portrait she saw about 10 years ago on a trip with her husband and children to a Ripley’s Believe It or Not! Odditorium in Wisconsin Dells.

As a reward for her effort, she bought herself a present with money from the sale — a new washer and dryer.