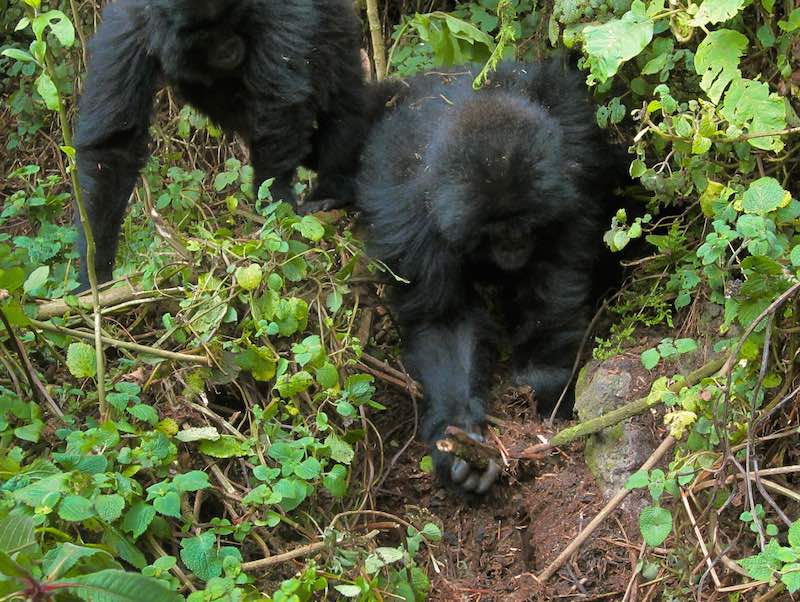 A pair of young gorillas have been observed seeking out and destroying poachers’ snares after an infant in their group was killed by one of the traps.

Conservationists say it’s the first time anyone has seen that kind of planning, cooperation, and ingenuity by mountain gorillas.

The poachers are after small game and most gorillas are strong enough to break free, but a one-year-old ape recently died of injuries after being caught in a snare last week.

A tracker at the park spotted a new snare near a gorilla clan Tuesday, but as he moved in to dismantle it, one of the great apes warned him away with grunts.

That’s when a pair of four-year-old mountain gorillas — Rwema, a male and Dukore, a female — sprang into action.

Rwema jumped up and down on the tree branch until he broke it and Dukore ripped apart the noose.

As the tracker and tourists watched, the apes spotted another snare and charged toward it. This time a third gorilla joined in dismantling the trap.

Though no one has ever reported this kind of teamwork in destroying poachers’ traps, people who work with great apes, such as Dr. Mike Cranfield of the Mountain Gorilla Veterinary Project, aren’t surprised by their ingenuity.

“If we could get more of them doing it, it would be great,” he joked in National Geographic.