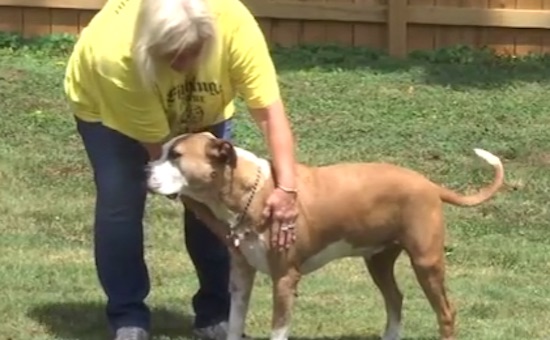 Carla Welch may have been in real trouble if she hadn’t been saved by a courageous 7-year-old pit bull appropriately named Hero.

When a man was assaulting an unidentified woman with a knife on July 22nd, Hero came to the rescue with barred teeth at the ready.

Though he managed to separate her from the attacker, Hero was stabbed five times and rushed to the local Baldwin, Georgia animal hospital by police officers arriving on the scene thanks to a call about the disturbance.

After learning of the pooch’s survival from Facebook, Carla from the Fighting For The Bullys pit bull rescue in Knoxville, Tennessee raised all the money to pay for his medical bills – all which had been discounted by the vets in honor of Hero’s bravery.

LOOK: Owl Can’t Stop Hugging The Man Who Rescued Her After Bad Accident

The lucky mutt has just been put up for adoption while he heals at Carla’s rescue center.

(WATCH the WSAV video below)