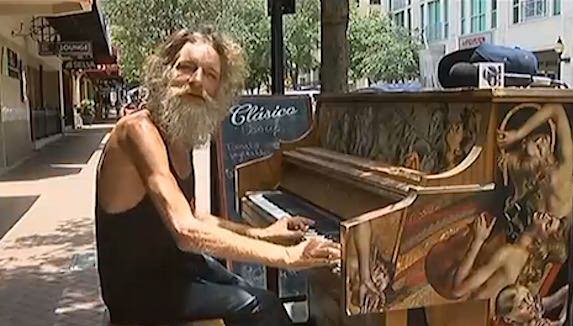 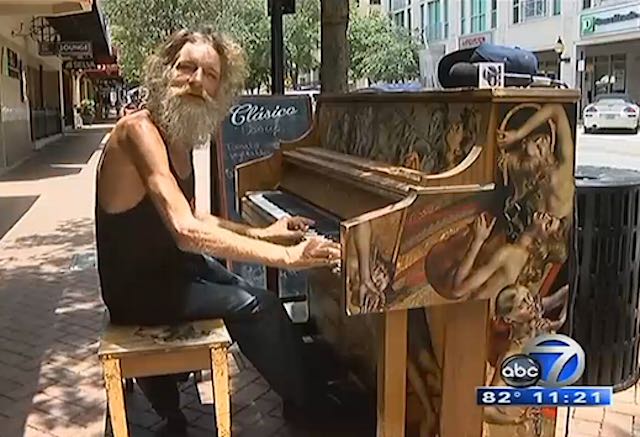 What started out as a novelty on the sidewalks of Sarasota, Florida, may end up helping a homeless man get off the streets.

It all began when the city installed “public pianos” around town — and a homeless man sat down and started playing amazing music.

“I was thinking I could just put my hat on the piano and make a couple dollars and get tips,” Donald “Boone” Gould told WWSB. Instead, he may wind up with a paying gig, because a local piano bar has offered Gould an audition.

Aroar Natasha was walking by as Gould played his cover of Styx’s “Come Sail Away.” She recorded it, posted it to her Facebook page and made Gould an overnight sensation — her video of his performance has been viewed more than three million times in four days.

Sarasota installed 'public pianos' throughout downtown. This homeless man now has the opportunity to be something other than 'just a nuisance' to all the people downtown. Just took my breath away. Wow.https://www.youtube.com/watch?v=JCguq3hTC2M

In the meantime, Jacqueline Bevan is helping make his dreams come true. She has set up a fundraising page that has already collected donations of $8,700 in one day.

“All funds will go to Donald (Boone) Gould to secure a home, a car and to possibly return to school for his last 3 classes for his music theory degree,” she says on the GoFundMe page.

Gould had played clarinet as a U.S. Marine and wanted to be a music teacher, but his life didn’t turn out as planned and he wound up on the street in 1998. He lost most of what he had, but he never lost his talent.

It could be the veritable ticket to his second act.

Inspire Your Friends and Followers By Sharing This Story With Them…