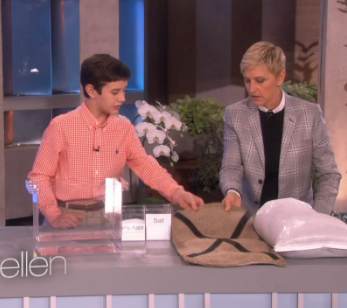 Peyton Robertson has always loved math and science. His parents taught him that whenever he saw a problem, he could invent a solution to fix it.

Among his impressive inventions is an idea he dreamed up after Superstorm Sandy for redesigning the traditional sandbag. Thes new sandbags provide better flood protection and they don’t weigh anything near 40-pounds, like old-fashioned ones stuffed with sand, which makes for easier transporting.

Because they use polymers and salt instead of sand, after the flooding (when the water evaporates) the bags shrink back to their thin-as-air, light-weight size.

The innovative design earned him $25,000 along with the Top Young Scientist award.