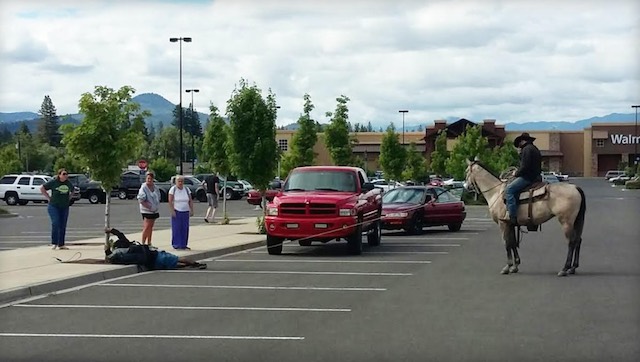 He’s being called the “Lone Ranger” of Oregon after this cowboy was in the right place–a Wal-Mart parking lot–at the right time to rescue a lady in distress, just like a knight on his steed.

On Friday morning, Robert Borba heard a woman yelling, “Stop him he stole my bike!” Instead of watching the thief ride off into the sunset, this champion bull rider grabbed his horse from the trailer attached to his truck and galloped after him.

He lassoed the thief easily, like he would any animal, and the rope tightened at his feet.

“Stealing ain’t right so I figured I’d get him stopped you know?” he told KOBI News.

Borba held the man until Eagle Point police arrived, and then headed back to the farm to tend to his horses.

(WATCH the video below – Photo by Rob Roque, US Lawns of Medford)