Home All News Animals After 99-Year-old Expresses Wish to Meet a Penguin, Her Entire Nursing Home... 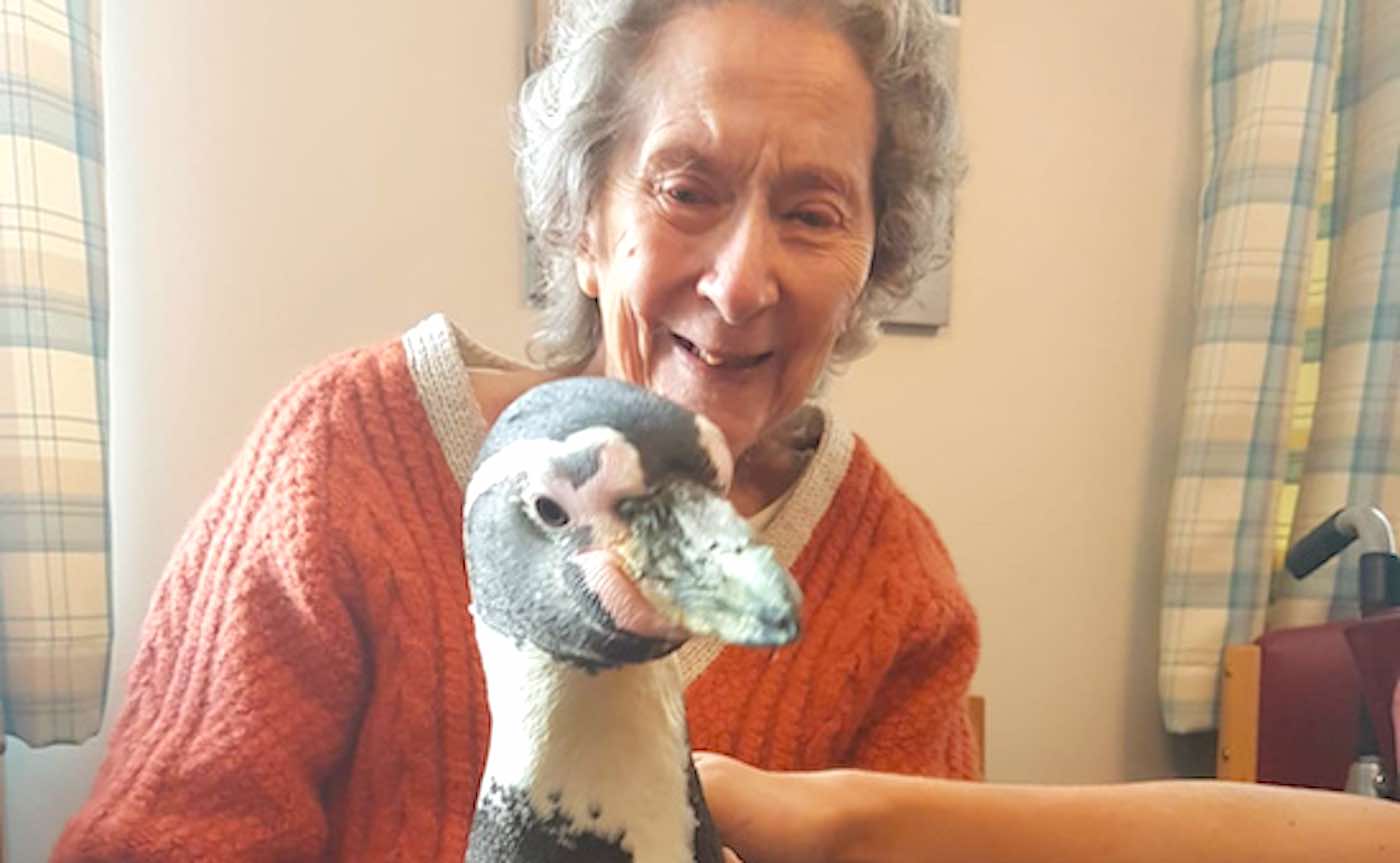 These adorable pictures show three penguins parading around an English care home after a 99-year-old resident expressed her wish to “meet one” in her lifetime.

Great-gran Joyce Gardner couldn’t believe her eyes when the two-foot-tall birds waddled into the facility three months after she made the unusual request.

Speaking after the visit, Gardner said: “I’ve always loved animals, especially penguins. To meet one in real life was one of the best experiences I’ve ever had.”

RELATED: Pet Me! Therapy Dog Refuses to Give Up on Hospice Patient

The visit was orchestrated by facility manager Elizabeth Stephens after she learned of Gardner’s bucket list wish. Stephens spent weeks working out how she could possibly get penguins inside her nursing home; thankfully, she was eventually put in touch with officials at Heythrop Zoological Gardens in Oxon, which houses 20 Humboldt penguins that often work on camera or at live events.

Last week, three of the pint-sized animals called Pringle, Groot, and Charlie, traveled to the care home in Lincoln with two experienced handlers—and the home residents were thrilled by the surprised visit.

“I’m always looking for something different to entertain the residents, so when Joyce requested to meet a penguin, I thought it was a great idea,” said Stephens.

“I’m so glad we were able to get it organized because everyone had an absolutely wonderful time, including the penguins,” she added. “They’re such incredible and inquisitive little animals, so they interacted amazingly with the residents, who couldn’t believe their eyes.”

The cheerful little birds, which hail from Chile but live at a British zoo, have incredibly sociable natures, meaning they can be picked up and petted by humans.

Whenever new residents arrive at Bernadette House they are asked to make a wish, to see if it can be granted.

“Some people ask for a certain type of cake or a specific film to watch but Joyce asked to meet a penguin, which was a first for us,” mused Stephens.

“I did some research to see if it was possible and eventually managed to make it happen.”

The care home owner added that the penguins were “incredibly friendly”. Making the rounds were Pringle, a 6-year-old male, Charlie, a 12-year-old male, and Groot, a young 7-month-old female.

“They were clearly very used to being around people because their behavior was wonderful,” said Stephens. “I’m not sure who enjoyed the day more, the residents or the penguins.”

This is not the first time that animals have been used as therapy for nursing home residents—research shows that contact and companionship with animals can reduce a patient’s cortisol levels and provide an overall boost to their wellbeing.

The unorthodox form of therapy is said to help with a range of issues including anxiety, autism, poor behavior, low self-confidence, stress, and trauma.

In recent months, Stephens has arranged for llamas, dogs and even chicks to visit her home.

“Elderly people—and particularly those with dementia—seem to have a really special and unique connection to animals,” she said. “I think it’s because they are very non-threatening and calming.”

The Humbolt penguins that visited last week have been dubbed “showbiz penguins” because they’re so often featured on camera or at live events.

Their most famous English screen appearance was in a 2017 episode of Netflix series The Crown when they’re pictured being fed by Matt Smith playing Prince Phillip.

(WATCH the February news coverage of the penguins in action below)