Home All News Animals Puppy Abandoned in Airport Bathroom With ‘No Other Option’ is Inundated With... 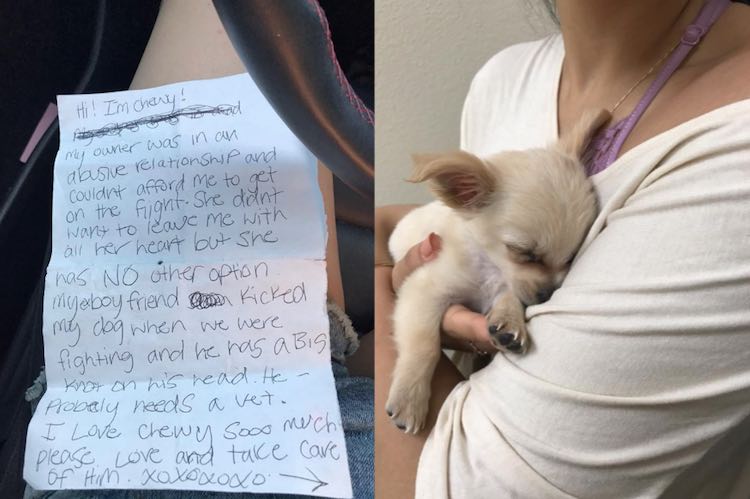 The owner of Chewy the dog was not happy about abandoning him in the airport bathroom – but she didn’t think she had any other choice.

The Chihuahua puppy was left in one of the restrooms of McCarran International Airport in Las Vegas, Nevada with a note that read:

“Hi! I’m Chewy! My owner was in an abusive relationship and couldn’t afford me to get on the flight. She didn’t want to leave me with all her heart, but she has no other option. My ex-boyfriend kicked my dog when we were fighting and he has a big knot on his head. He probably needs a vet. I love Chewy sooo much – please love and take care of him.”

When a passenger found the young pup, they called a local animal shelter, Connor and Millie’s Dog Rescue (CDMR). After rescue officials arrived, they took Chewy to a veterinarian where he was deemed healthy and unharmed, despite the note’s warning of a head injury.

CDMR has been posting daily updates about the Chihuahua since his story went viral – and he’s been getting a lot of love, with so many adoption offers that they had to stop accepting applications.

“There has been tremendous interest in little Chewy!!! We are compiling all the interest forms and will be going through them all. CMDR would like to say thank you for all the offers of a loving home,” the shelter wrote in a Facebook post. “However, there is but 1 Chewy and he can go but to 1 home. Please consider the hundreds if not thousands of ‘Chewys’ loaded with love that are desperately seeking homes in shelters which are at max capacity, rescues are full!”

LOOK: Photographer Gets Dogs Adopted With Stunning “Cones of Fame”

CDMR says that they are waiting to see if the mother reaches out to the shelter in order to reclaim Chewy – however, since the woman was a victim of domestic abuse, she may not want to reveal her identity for the sake of her own safety.

“We will absolutely reunite should she come forward and wants him and is in the position to care for him safely,” says the shelter. “Her safety is a major concern and she may not be able to risk coming forward and CMDR asks that you respect her decision as it is hers and hers alone to make.”

Whether he is reunited with his previous owner, or he finds a new home, one thing’s for sure: Chewy is going to be adored wherever he goes.