Home All News Sports Race Car Driver Gives Up Chance Of Winning in Order to Save... 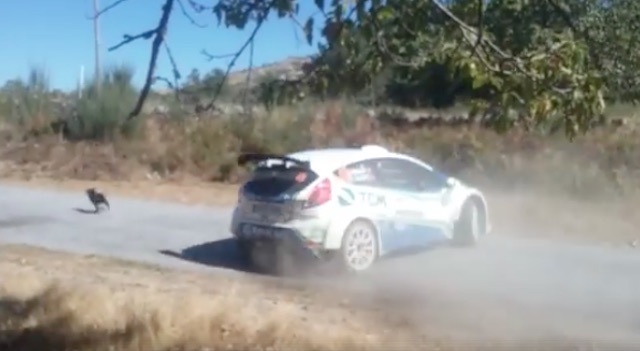 Some sports competitors might do anything for that first place trophy – but not Carlos Matos.

The professional car racer is being hailed for giving up the gold in order to ensure the safety of a stray dog that had wandered onto the race track.

Matos was piloting his Ford Fiesta R5 around the second pass of a track in the Constalica Rallye Vouzela competition last month when he saw the pup standing in the middle of the road.

Without hesitating, the driver brought his car – which had been speeding at around 90 miles per hour – to a screeching halt.

Though Matos only had seconds to react, his car stopped on the asphalt just before reaching the dog. Needless to say, the canine immediately took off running to safety after the near-death experience.

Matos then flipped a U-turn and continued on his way – however, the precious seconds that he had sacrificed to save the dog had cost already cost him the victory.

The driver from São Pedro do Sul, Portugal says that though his good deed meant defeat, he wouldn’t hesitate to do it again.

“Those who know me know that I have a great admiration for animals,” the driver told race representatives. “I have five dogs in my house, and there is one that, at night, does not lie down until I arrive.

“If the episode were repeated today, I would do exactly the same thing,” he added.