Home All News Animals Persistent Pup Scores Job and Adoration After Charging into Soccer Game For... 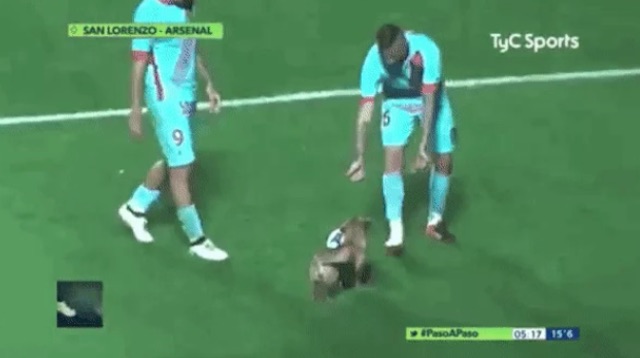 When this persistent pup charged onto a soccer field mid-game, she not only inspired her team to win the match – her interruption also landed her a job.

The canine first made her appearance 29 minutes into the soccer game between San Lorenzo and Arsenal de Sarandí at the Estadio Pedro Bidegain in Buenos Aires, Argentina on Sunday night.

The dog took possession of the ball and decided to show off some of her moves – and for being a relatively small dog, she was pretty impressive.

WATCH: Hummingbird Refuses to Leave the Dog Who Saved Her Life

Some of the players can be seen trying to coax her into giving the ball back and leaving the field, but the furry football player refuses to leave without having some fun. After a minute or two of hilarity, the pup managed to score some passes – and some belly rubs – before being taken off the field.

When San Lorenzo went on to score a single goal that won them the game, the players, fans, spectators, and reporters firmly believed that the young pup was a good luck charm for the team.

One of the reporters even tried to get an interview with the canine after the game, and she definitely stole the show when she stole the microphone.

The groundskeeper says that while they don’t know where the dog came from, he would be taking her into his care as a field dog. Her job will be to scare off pigeons from eating the grass seed planted on the field.

And after all, who would not want to keep such a cute – and talented – good luck charm?