Home Most Popular Joyous Russian Flash Mob Dances to Puttin’ On the Ritz! 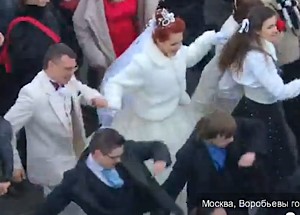 An elaborate Russian dance flash mob that broke out on a wintry public square to the song, Puttin’ on the Ritz, has tallied 4.6 million views on YouTube.

Some commenters think it’s a protest against Putin, while many of the Russian commenters say it’s pro-Putin. No details were provided by the producers when they uploaded the video on Feb. 26.

One thing is certain. It is fun for all who watched and danced to this 83-year-old song written by Russian-born American Jew, Irving Berlin.