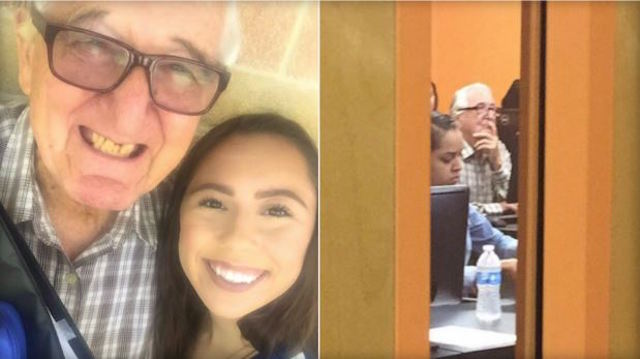 There’s no greater untruth than the notion that someone is too old for education–and Melanie Salazar’s 82-year-old grandfather is perfect evidence of the contrary.

Rene Neira has been studying economics since the 1950s, but he decided to put his degree on hold so he could get married and start a family.

Now the studious senior is going back to school with his 18-year-old granddaughter at Palo Alto College in San Antonio, Texas.

RELATED: They Wanted Her to Undergo Cancer Treatment, But 90-yo Hits The Road Instead

The two have become university celebrities since Melanie’s photo of the duo made its debut on Twitter, inspiring thousands of retweets.

“I think people are very drawn to him because this is an every-day person—an 82-year-old person— who isn’t giving up on their education,” Salazar told CBS News. “He’s determined to get his degree. It’s been awesome knowing how something that seems so normal to me is so out-of-the-ordinary and extraordinary to everyone else.”

Neira plans on graduating with his Associate’s degree before transferring to the University of Texas for his bachelor’s.

As for Melanie, she’s just happy to have a role model – and a friend – for her freshman year studying liberal arts.

You Don’t Need A Degree To Spread This Story Around: Click To Share – Photo by Melanie Salazar