Home All News Inspiring Teen Wanted to Auction His Pig to Help a Teacher – But... 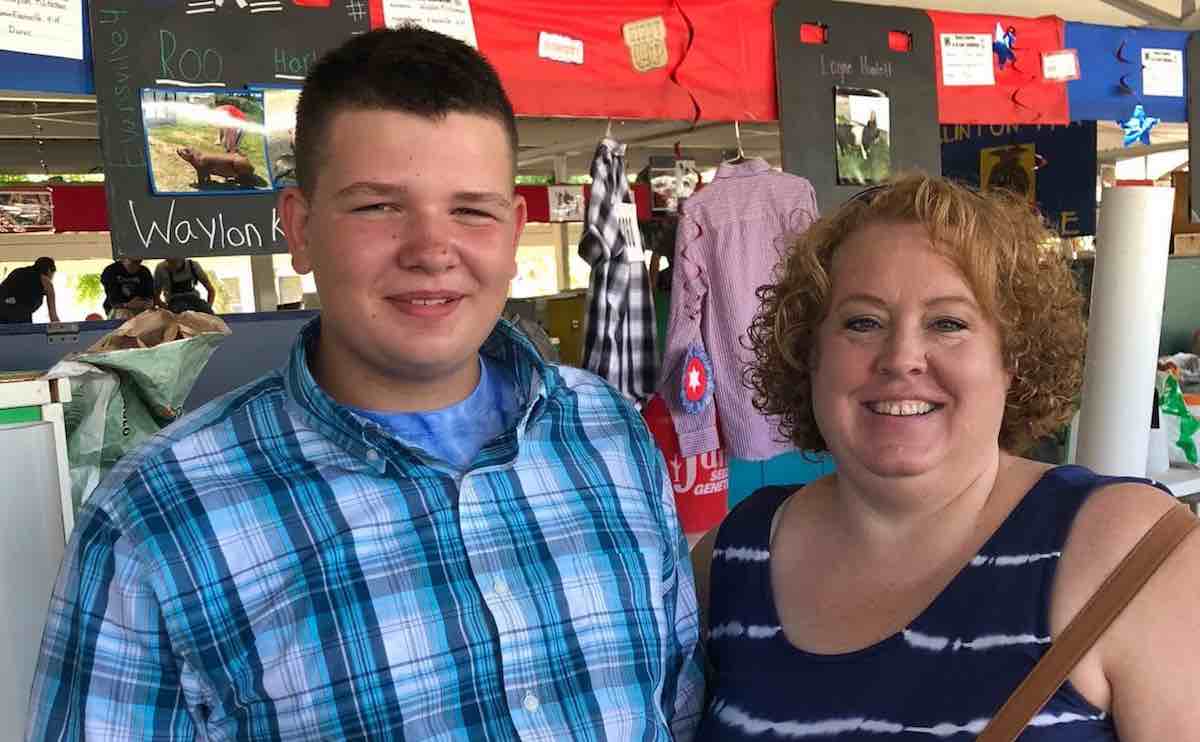 A teen had a 265-pound gift for his teacher if he could overcome his stage fright enough to pull it off. He succeeded—and the gift really brought home the bacon.

A shy 15-year-old boy was heartbroken to hear that his favorite teacher in Evansville, Wisconsin was retiring. He even tried to bribe her, handing over all his money, $52, because she was leaving on a mission to raise money for cancer.

It didn’t work, but the donation made Waylon Clitsman realize how good it feels to help.

Kim Katzenmeyer – or “Miss K” as he called her – was stepping down from her position as an educator so she could dedicate her time towards Beat Nb: a charity that raises money for neuroblastoma research. Her passion for the charity was kindled after her four-year-old niece was diagnosed with it, the most common form of childhood cancer, she will have to fight the disease for the rest of her life.

RELATED: Farmers Stay Silent During Auction So Young Man Can Win the Bid on His Long-Lost Family Farm

To help Miss K, Waylon decided to take the pig he’d raised and auction it off at the county fair and donate all the money– but after several people heard about his generosity, the auction took a very unexpected turn.

The boy had emailed his situation to several companies who would be buying—hoping they would bid higher than the usual price of $3-to-4 per pound.

His plan worked. When the bidding kicked off, the price jumped to $11—but then one of the bidders, Dan Drozdowicz, had an idea and struck a deal with his competition.

He won the bidding on the pig—then he donated it back to be auctioned again. The second winner bought it for $10 a pound—but then he gave it back, too.

Finally, a third competitor, Dave Moll, was free to buy—then, he, too, unexpectedly donated the pig back—for a third time.

Moll, who is the co-founder of the construction company that employs Waylon’s father, told The Washington Post: “I had had no intention of spending that much money or giving the pig back. But that’s what the people ahead of me did, and I felt like it was the right thing to do, so I did.”

CHECK OUT: 15-Year-old Melts the Hearts of Airline Passengers When She Befriends Blind and Deaf Passenger

The pig was finally bought and sold a fourth time for $5.50 per pound, meaning that Waylon managed to raise $10,070 for his teacher’s charity.

“I did not see that happening,” Waylon told The Post. “Usually, they just sell it once! My dream got bigger and bigger every time they said, ‘Give it back.’”

This is not Waylon’s final contribution to the charity, however – he is now preparing to auction off his three acres worth of pumpkins in the fall, and he plans on donating everything to Beat Nb.

RELATED: Good Manners Pay Off: When Man is Desperate to Meet Lotto Deadline And Stranger Lets Him Go First

“I am bursting, my heart is bursting with pride for him,” Miss K said. “He doesn’t know the impact that he is having… Someday he will.”