Home All News Inspiring They Texted the Wrong Number, But it Inspired a Total Stranger to... 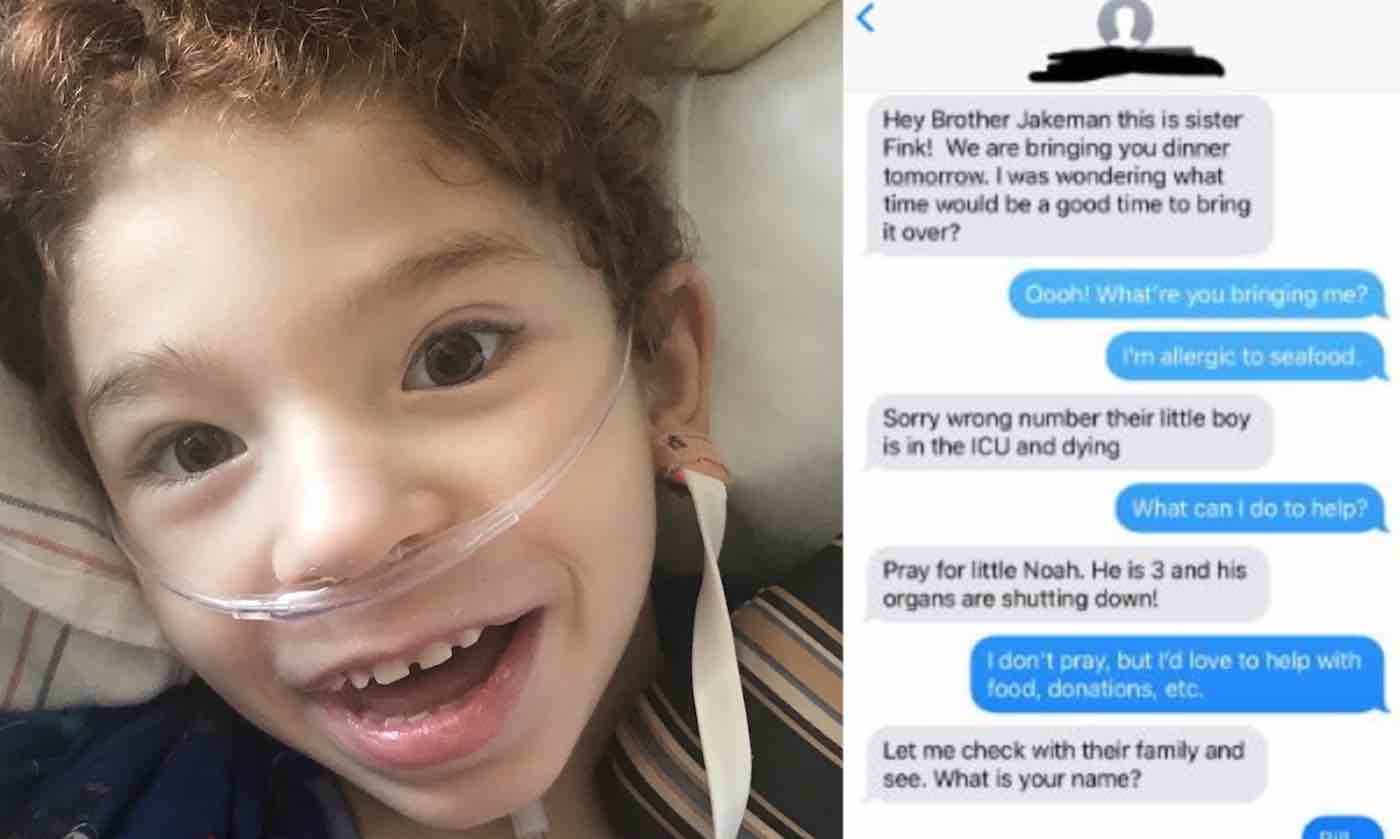 An accidental text to a wrong phone number has sparked an unexpected wave of kindness towards a family in need.

Abby Fink had been trying to get in contact with her friend from church named Alex Jakeman so she could bring some dinner over to his house.

Jakeman and his family have been having a rough time since their 4-year-old son Noah recently suffered a massive seizure which landed him in the ICU at Phoenix Children’s Hospital.

Jakeman’s family told CNN that in addition to the non-verbal youngster having Lennox Gasteau Syndrome, which is a severe form of epilepsy and cerebral palsy, he also has brittle bones, abnormal brain development, impaired motor functions, and autism.

So when Fink sent her text message intended for the Jakeman family, it did not take her long to realize that she had sent it to the wrong number.

“Hey Brother Jakeman, this is Sister Fink, we are bringing you dinner tomorrow, I was wondering what time would be a good time to bring it over,” said Fink in her text message. She then received a joking response from a man named Bill, saying: “Oh what are you bringing me? I don’t like seafood.”

Fink then noticed that she had sent the message to a phone number that was one digit off from Jakeman’s. She quickly apologized and explained how she had meant to send the message to a grieving family.

CHECK OUT: Flight Crew and Passengers in First Class All Welcome Boy With Autism During Mid-Flight Meltdown

On the other end of the conversation, Bill realized the seriousness of Fink’s inquiry. Upon learning about the Jakemans and their son, he offered to start his own social media fundraiser in order to gather gifts, donations, and contributions from his friends list.

Since Noah was recently released from the ICU, Bill plans on stopping by the hospital so he can present the cards, gifts, and donations to the Jakeman family.

WATCH: Homeless Dad Receives Flood of Support After Woman Tried to Facebook Shame Him for Sleeping in McDonalds

“It’s amazing. He is a total stranger and he just wanted to jump into action,” Fink told CNN. “I told him he was an angel sent to help this sweet family.”

If you want to donate to the Jakeman family, you can also contribute to their GoFundMe campaign, which has almost reached its goal of $12,000.

Multiply The Good By Sharing The Good News To Social Media…