Home All News Kids This Update From Unlikely Friendship in 2016 is a Sweet Reminder that... 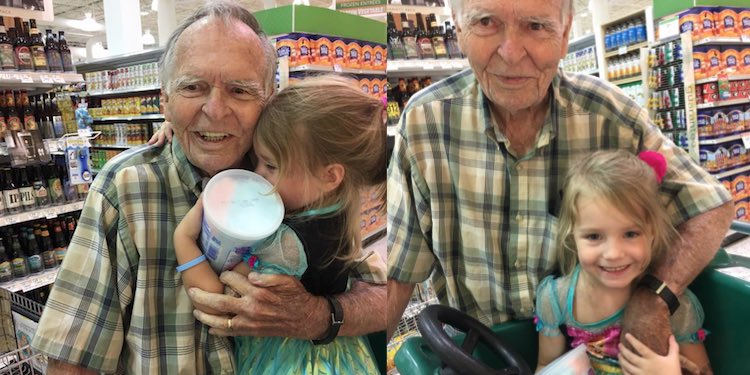 LISTEN to this Good News Guru story, which was broadcast on the radio June 8th with Ellen K and Geri on KOST-103.5. (Subscribe to our new podcast on iTunes – or for Androids, on Podbean) — Or, READ the story below…

Father’s Day love doesn’t have to be reserved for the man who raised you. This story shows it can even be given to someone you meet in a grocery store—and it can transform their life.

Peterson was grieving the death of his wife—and he wasn’t sure if he would emerge from his deep depression, or ever sleep through the night again.

But, then he met a 5-year-old in the grocery aisle.

She spotted Peterson and waved to the old man. She declared that it was her birthday, and demanded that he give her a hug and take a picture with her.

Norah was already a self-proclaimed lover of old people. She says she likes them so much because they walk slow like her, and have very soft skin. She knows they’re gonna die soon so she wants to “love ‘em all up” before then.

RELATED: When Elderly Woman Fell Ill, Her 7-Year-old Bestie Began Checking Up On Her 5 Times a Day

“She zeroed in on him like a missile,” Norah’s mother, Tara told CBS News.

Guarded at first, Peterson soon softened under her spell. With quivering lip and a tear, he told her mom why the gesture meant so much to him.

Touched by his heartbreak, Tara later found Peterson on Facebook and asked if they could come over to his house in Georgia for a play date – and they’ve been going there weekly, ever since.

LOOK: When Canine ‘Soulmates’ Can’t Be Kept Apart, Homeowners Relent and Work Together

“It’s remarkable,” says Tara. “I mean, I think a lot of people thought that it wouldn’t continue, but they’re pure magic.”

A month ago, Mr. Peterson realized just how much the youngster cared about him after she knocked on the door. When he opened it, she started hugging him – and she wouldn’t let go.

The little girl was distraught because it took him so long to open the door, and she was wondering if something happened to him

In her short life, she can’t remember being without him—and, since that fateful day in the grocery store, the old man can’t remember a year when he’s slept so well.