Home All News World U.S. Money May Some Day Be Plastic and Glowing to Stop Counterfeiters 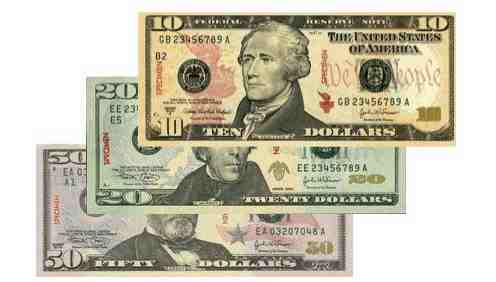 The cashier in the sandwich shop was trained to recognize counterfeit money, a necessary skill these days since advanced computers and printers have made the copying of money more common. As she holds the fifty-dollar bill tightly, it changes color in her hands. She looks closely at the eyes of President Grant. They light up. She folds the bill in two but it springs back to its original shape. Accepting the payment as genuine, she nods and hands me my change. Although this may sound bizarre, these are exactly the kinds of security features the U.S. Secret Service may one day embed in paper currency to slow the tide of casual counterfeiters.

The fact is, all a person needs for the manufacture of illegal money today is a computer system with a high resolution printer and scanner, specialty paper that looks and feels like cotton, and the best desktop publishing software that money (ironically) can buy.

Since 1865 the U.S. Secret Service has been working tirelessly to thwart the efforts of would-be counterfeiters by building security features into the currency that make it easy (or easier) to identify the real bills from the fakes.

Take the last issuance of currency in 2004. A number of unique security features were added on top of those existing from previous currency releases, including:

A recent National Research Council report suggests making future generations of printed currency even more secure by adding interactivity to the mix and hi-tech enhanced security features. Changing the material on which the currency is printed can also help to solve the problem, but selecting a durable long lasting material is challenging. Plastic fits the (ahem) bill, however and is already in use in Australia. The currency looks and feels like a typical banknote but has much better longevity. The primary advantage? Using plastic to print only low-denomination notes would eliminate the current practice of bleaching these to reprint them as higher denominations, which could continue to be made of cotton.

Making the notes interactive can be done by borrowing cutting-edge technology from the electronics industry. Incorporation of flexible organic circuits powered by an embedded photocell would cause sections of the bill to glow. Alternatively, the use of piezoelectric materials would change shape when a voltage is applied by a simple device to be used by a cashier. The shape change could be as subtle as raised bumps on the note. Using both of these ideas together would produce a bill that, when squeezed, would produce light briefly. Perhaps even lighting the president’s eyes! Adding temperature-sensitive inks (think of mood rings here) and the warmth of a finger touch would cause them to change from one color to another or disappear entirely. Using other specialized dyes could result in color changes when the note is breathed on due to the higher content of carbon dioxide in breath than air. The list goes on and it is not clear yet which of the recommendations from the report will be adopted, but one thing is for sure, our currency is about to get a lot more interesting and bright.

Michael Little works in analytical chemistry and has almost 20 years experience in the research based pharmaceutical industry. Michael resides in Laval, Quebec, with his wife and three children. Michael has written occasional science articles for GNN since 2007.