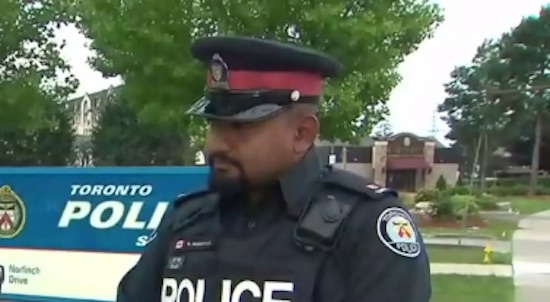 This cop knew he had to give a troubled 18-year-old a second chance after he was allegedly caught stealing an outfit for a job interview – and now, they are seeing the fruits of his compassion.

The youth was originally caught stealing a dress shirt, tie, and socks from a Toronto Walmart last week. When Const. Niran Jeyanesan was called to the scene, the young man explained that he had stolen the outfit because he had a job interview coming up and he did not have the money to buy it.

Additionally, he explained that he was trying to turn his life around and earn money for his family after his father had fallen ill.

CHECK OUT: Jail Inmates Rush to Save Fallen Officer, Rather Than Escaping

Jeyanesan, who says that he is a firm believer in second chances, bought the outfit for the young man, agreed not to charge him for theft, and wished him luck on the interview.

Then, on Friday night, Jeyanesan got a call from the 18-year-old excitedly saying that he had landed the position

“He confirmed that he had got the job. I’m just happy,” Jeyanesan told the Toronto Star. “Happy that this person actually went and did what he said he was going to do and followed through with it and that he was determined to get that position, and he did. That’s all him. So the second chance truly works.”