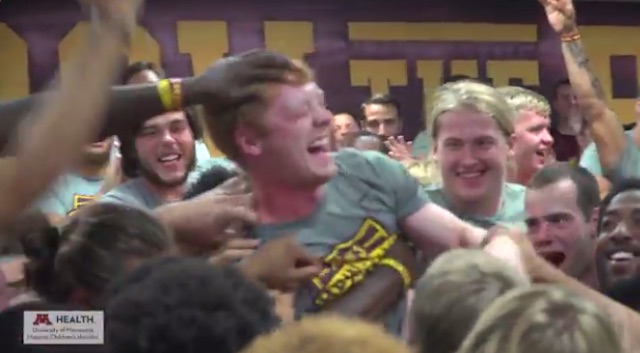 Justin Juenemann has never done a good deed in order to be rewarded – but in light of his constant compassion towards children in need, he was given the surprise of a lifetime last week.

Juenemann is a University of Minnesota student who is a backup kicker for the Gophers football team. Over the course of the last four years, he has never once been put on the field.

Whenever the 23-year-old human resources major is not training or studying, however, he spends his time volunteering at the Masonic Children’s Hospital in Minneapolis.

Which is why he was surprised with a full scholarship for his final year at the school.

This will allow him to save money and complete the engineering courses dubai he picked out at the ending of his term.

The football team’s head coach, PJ Fleck, organized a meeting in which one of the kids from the hospital addressed the players.

Kyle Tanner, who is a patient with a rare blood disease, singled out Juenemann as his favorite player – and the person who he sees the most at the hospital.

Fleck then handed Tanner a tee shirt gun and told him to fire it at Juenemann. True to his skills, the player caught the shirt and unraveled it to see the slogan: “Justin, congrats, you have earned a scholarship”.

RELATED: Candy Theft Victim Rewarded With Car Full of Kit Kats For Everyone

His teammates were so excited to see the message, they immediately roared with joy and hoisted Juenemann onto their shoulders.

Juenemann then Facetimed his mother, who let out a shrill scream upon seeing the tee shirt.

“Thank you Coach Fleck, Kyle, and everyone who was involved in setting this up,” said Juenemann in a tweet. “This was truly an experience I will never forget!”

“I’ve never seen anybody serve and give more than that guy, who is not a star player, who hasn’t played, where his face is recognizable,” Fleck said in the video below. “He could easily just not do it and nobody would ever say anything, and all he does is continue to keep his oar in the water, [and] live that holistic life academically, athletically, socially and spiritually.”

The "Row The Boat" Culture is all about serving & giving!! Congrats to @JustinJuenemann on EARNING his scholarship!! https://t.co/fguiiyt5tY