Home All News Inspiring Instead of Getting Married Without Her Ailing Mom, She Takes the Wedding...

Jane Hartstein has been hooked up to a ventilator in a respiratory care unit for more than three years, but she’s never been more out of breath than she was recently when her daughter Nicole and her fiancé surprised her by bringing their wedding to her bedside.

Jane, who suffered a stoke, was completely shocked seeing her daughter in her wedding dress.

“I can’t believe this,” she said as she was wheeled into the family room of the unit, decorated with twinkle lights, champagne glasses, and a chuppa canopy for the marriage ceremony. “I’m just so happy, I can’t believe they did this.”

According to Nicole, she and her fiancé wanted her mother to be part of their wedding, but knew she couldn’t make the trip to the New Jersey wedding venue on May 26. So, instead, they decided to get married in front of her mom prior to their scheduled ceremony, officially changing their anniversary—if only for those in the know.

RELATED: Newlyweds Celebrate By Bringing Wedding Guests to Shop for Toys to Give Away

The big ‘wedding’ took place as planned at the country club in Woodland Park (and it was live-streamed on Jane’s TV), but Nicole and Edward knew that the important ceremony had already taken place.

After the staff at the Gurwin Jewish Nursing & Rehabilitation Center in Commack, Long Island had transformed the family room into a wedding chapel, complete with lights, Mr. & Mrs. signs and tulle, Jane was wheeled in and she burst into tears—so happy to be able to share in her daughter’s joy.

When Nicole saw her mother cry, she had to wipe her own away, as well. “I know you wanted to be at our wedding, so we’re bringing our wedding to you,” she said, hugging her mom before she took her place to walk down the makeshift “aisle” in the hallway. 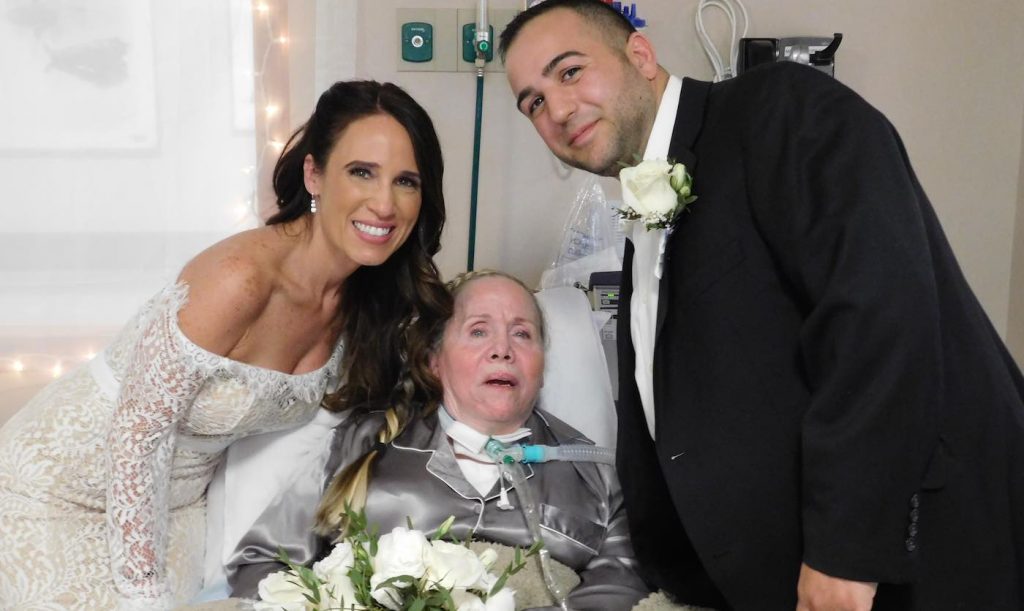 MORE: After Breaking Off Engagement, Bride Lets ‘Some Good Come’ by Donating Wedding to Stranger in Need

“A Thousand Years” by Christine Perri played and staff and residents watched as Nicole was escorted by her uncle, James Jacobs, into the room where a small group of her family, including her mom, waited with the priest and rabbi. Nicole beamed as the ceremony transformed her officially into Mrs. Guida.

An eight-year relationship led up to this point, and Edward knew that his bride-to-be needed her mother to be at her wedding. “I just want Nicole to be happy, and I want her mom to be happy, too. We knew we wanted to do this,” he said.

LOOK: Groom Can’t Contain His Laughter When Bearded Best Man Shows Up in the Dress Where His Bride Should Be

As the kiss was exchanged and congratulations were expressed, Jane sat watching the festivities. “I can’t believe it,” she said, tearing up. “This is the best gift anyone could ever have given me.”