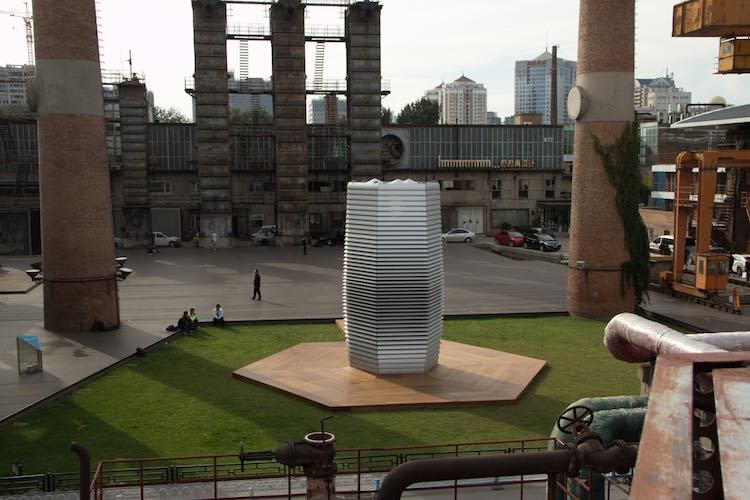 This shimmering park tower isn’t just a glamorous piece of architecture: it is the largest air purifier in the world, and it is turning China’s smog into diamonds.

The tower is a 23-foot tall metal structure that is capable of filtering 75% of harmful PM2.5 and PM10 particles from the surrounding air, thus producing 30,000 cubic meters of clean air per hour. This creates a bubble of air around the tower, offering smog-free solace to urban dwellers.

According to the tower’s creator Dutch artist Daan Roosegaarde, the Chinese smog that is accumulated by the air filter is the equivalent of smoking 17 cigarettes per day.

Plus, by using ion technology, the tower uses very little electricity – about as much as an electric kettle. The electricity that it does use, however, comes from wind power.

The air filter, which was built as a part of Roosegaarde‘s Smog Free Project, sucks up the tiny particles of carbon from the air and turns the substance into diamonds. The diamonds are then used to make jewelry that is sold to help finance the construction of new towers and filtration products.

The tower was originally installed in Rotterdam, before being transferred to Beijing last year, followed by Tianjin, and then the World Economic Forum in Dalian, China last month. Soon, Roosegaarde hopes to move the tower to more polluted cities in India.

In addition to the tower, the Smog Free Project has started developing the Smog Free Bicycle: a contraption that circulates the air in front of the user so that they can travel in a relatively smog-free bubble of clean air.

“Beijing used to be an iconic bicycle city,” said Roosegaarde. “Together with Chinese and Dutch expertise we will bring back the bicycle as a cultural icon of China and as the next step towards smog free cities.”

“True beauty is clean air and it should not be taken for granted,” he continues. “Smog Free Project is a series of urban innovation to reduce pollution on the city scale, a package deal for Mayors for an immediate impact and lasting effect towards smog free cities.”