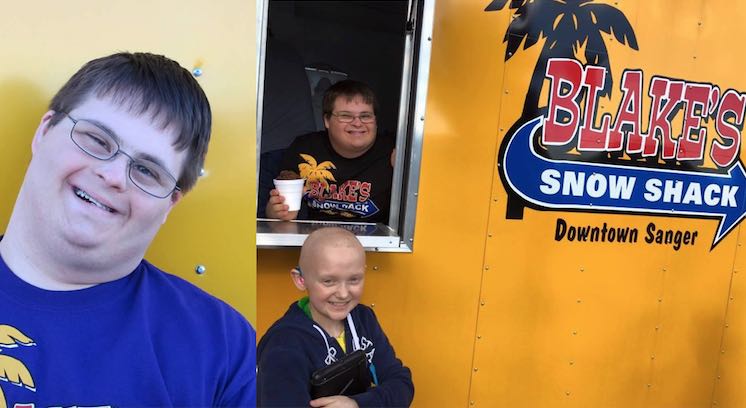 A 20-year-old with Down syndrome becomes the youngest business owner in town this weekend during the grand opening of a venture that combines his two favorite passions – people and snow cones.

Blake Pyron had a hard time finding a job in this small Texas town after the restaurant closed where he was employed, so his family suggested he start his own business.

RELATED: When a Cheerleader with Down Syndrome was Bullied, 3 Players Walked Off the Court

His mother, Mary Ann, said Blake missed his customers terribly so they pondered businesses that would let him interact with people. When they considered his passion for snow cones, “Blake’s Snow Shack” became the obvious answer.

His brother joined him in dreaming up the flavor choices, including coconut and cotton candy–and inventing new ones with names like Hulk and Shark Attack.

WATCH: Girl With Half Her Brain Becomes Speech Pathologist as Adult

When the people of Sanger heard about the idea, the community rallied behind the young man.

Blake says he will be able to run his own business because his parents never listened to others who wanted to label or limit him. And Mary Ann says the opening is timed for Mother’s Day weekend, partly, to send a message to parents of special needs children about what their kids can accomplish.

CHECK OUT: Mom Adopts Hospice Babies No One Else Wants

“We were told Blake wouldn’t be able to do things, and we looked past that,” Mary Ann told ABC News. “You don’t know us. You don’t know our child, so don’t label him. We haven’t, and he turned out great.”