Home All News Laughs Amused Parents Are in Luck After Toddler Puts $1,000 Through Paper Shredder;... 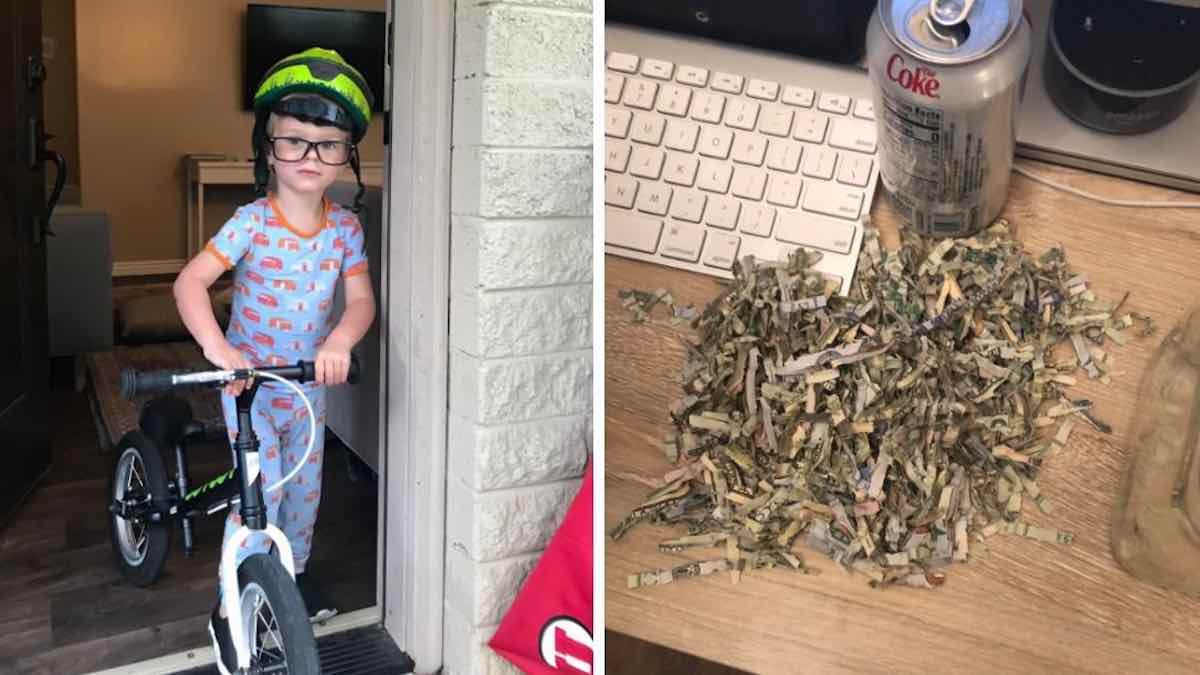 Most new parents know all about toddler-proofing their home – but no matter how prepared you are, mistakes can always happen.

Ben and Jackee Belnap had to learn this the hard way after their 2-year-old son Leo found an envelope filled with cash that was laying on the kitchen counter of their home in Holladay, Utah.

The Belnaps have been saving up money for the last year to pay Ben’s parents back for University of Utah football season tickets. Originally, the couple had kept the cash locked away in a filing cabinet – but once they had squirreled away $1,060, they placed the cash in an envelope and set it on the counter so they would remember to deliver it to Ben’s parents.

Then one day over the weekend, the Belnaps were confused to find that the envelope had disappeared. They looked all over their house, even in the trash.

RELATED: Parents Have Perfect Solution to Daughter Sneakily Ordering $350 Worth of Barbies From Amazon

Finally, Jackee thought to look in their paper shredder.

“I’m digging through the trash and she hollers and says, ‘I found it,’” Ben told KSL-TV. “She’s holding the shredder and she says, ‘I think the money is in here.’”

Jackee goes on to say that Leo loves to help them use the paper shredder, whether it is for junk mail or important documents that need to be destroyed. So when he saw the envelope on the counter, he happily took it upon himself to help out his parents and dispose of the mysterious paperwork by putting $1,060 through the shredder.

So me and my wife had been saving up to pay for our @Utah_Football tickets in cash. We pulled our money out yesterday to pay my mom for the season... Well we couldn’t find the envelope until my wife checked the shredder. Yup. 2 year old shredded $1,060. pic.twitter.com/93R9BWAVDE

Though Ben and Jackee initially shed some tears over their savings, their grief eventually turned into laughter.

“For like five minutes, we just shuffled through it, not talking. We didn’t know what to do and then I broke the silence and I’m like, ‘Well, this will make a great wedding story one day,’” Jackee said.

MORE: After Happy Dad Holds Door Open for Stranger, She Slips His Son a Graduation Gift in Return

Thankfully, the good-natured parents have not lost their savings after all. The US Department of the Treasury can reimburse people for mutilated currency as a free public service, provided that the pieces of the bills can be returned.

After a quick phone call to the bureau, Ben was simply told to put the remnants of the money into a plastic baggie and mail it to the department with anticipation for a full value redemption after processing.

When Ben made a humorous Twitter post about the incident, sympathetic social media users tried to start a GoFundMe to reimburse them for their savings, but the Belnaps politely declined the offer. Instead, they asked their followers to donate to the Refugee Aid charity.

I’m not after any go-fund me or anything but this is a cause that my family and I care a lot about. We’ll hopefully get our money back from DC but refugee aid is a problem today. Hope everyone had a laugh at the story and brought you a little smile. https://t.co/M6Pp6AUjJl

In the mean time, the Belnaps “hope everyone had a laugh at the story” and they’re reassuring concerned readers that Leo will not be allowed near the paper shredder until he is older.