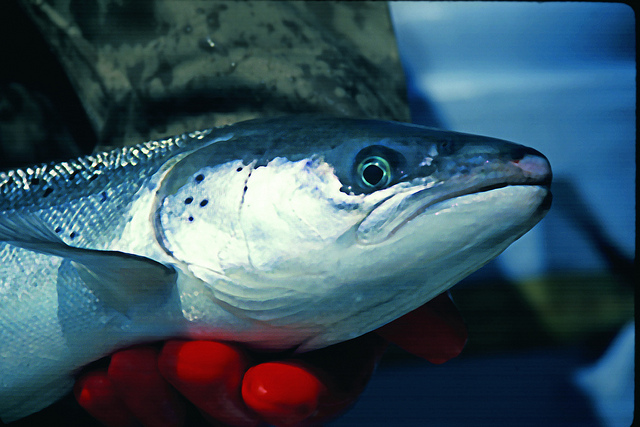 For the first time since the American Revolution, wild Atlantic Salmon are spawning in the Connecticut River.

Industrial pollution and a series of dams constructed in the 1700s killed off the annual runs that used to feature 50,000 of the fish swimming upstream to to lay their eggs — the largest such annual migration in North America at the time.

With new pollution controls becoming law, a restoration program in the 1960s tried to reintroduce the salmon to the river, which runs all the way from the mountains of New Hampshire through Connecticut and New York into the Atlantic Ocean, and in the 1970s, a captive breeding program tried to create a strain of salmon that conservationists hoped would eventually return to spawn in the river.

But the program ran into what Connecticut fisheries biologist Steve Gephard called “a perfect storm” of bad luck.

Salmon and other fish populations in the North Atlantic saw massive population declines in the 1990s as their food supply disappeared. Shifting ocean currents in the 2000s further damaged the recovery. To top it off, a hurricane severely damaged the program’s hatchery in 2011, so the Fish and Wildlife Service gave up on the program the following year.

Biologists were surprised, three years after it was shut down, to discover five salmon swimming upstream past a dam in 2015. After following them, the scientists saw something no one had seen on the Connecticut River in 230 years — a salmon nest full of eggs.

RELATED:  Not Seen for 100 Years “Royal Turtles” Crawl Back from Extinction

Conservationists are keeping the location secret, and quietly watching, waiting for the eggs to hatch later this spring – delivering the first Atlantic Salmon born in the Connecticut River since the birth of the United States.

These, too, will instinctively return to the river to lay their own eggs, beginning an ancestral line that researchers hope will thrive.

Send This Hopeful Story Upstream…Share it.