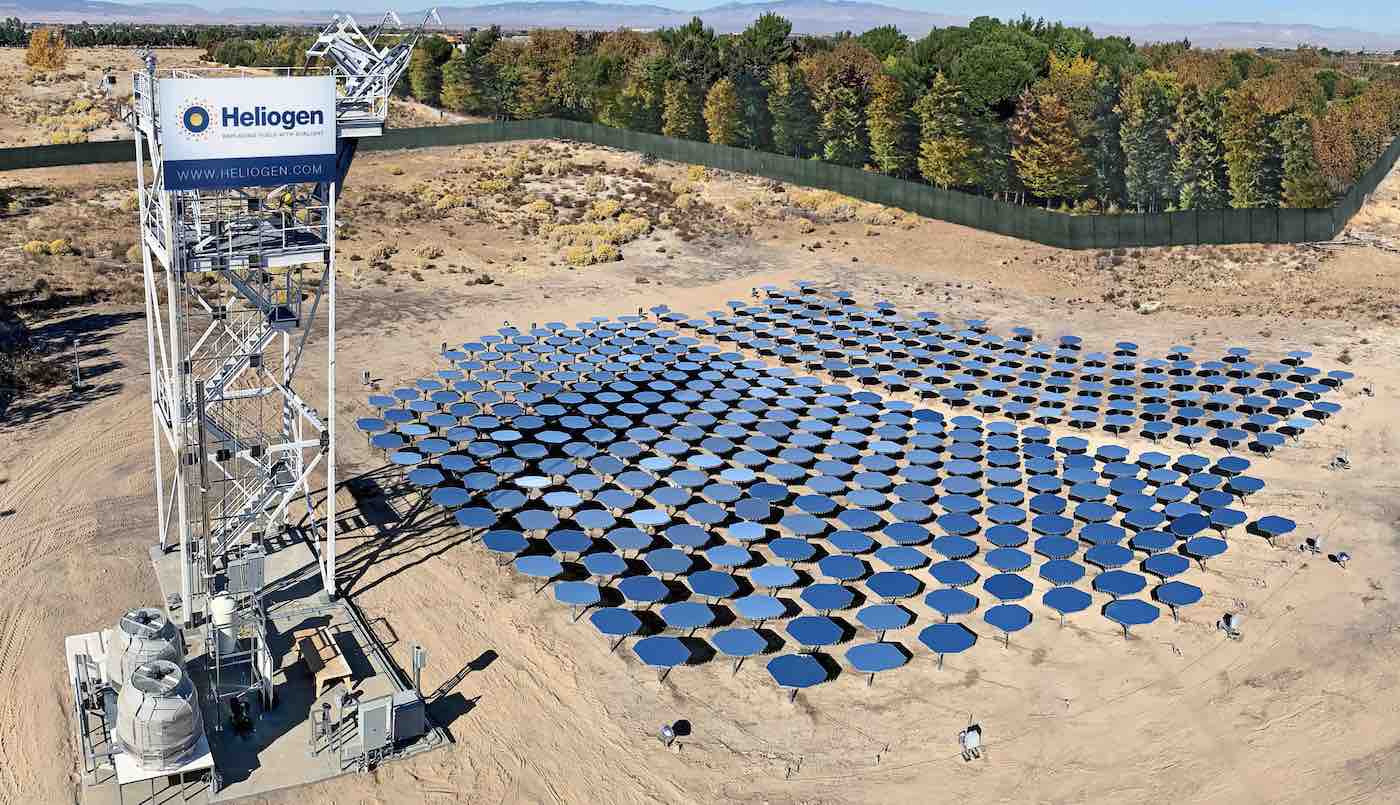 A secret clean energy startup backed by Bill Gates has just gone public with the announcement of its new technology that uses concentrated solar energy to exceed temperatures greater than 1,000 degrees Celsius (1,800 degrees Fahrenheit)—and it could be a game-changer in the fight against the climate crisis.

For perspective, that kind of heat is about one-quarter of the temperatures found on the surface of the sun. At that temperature, the energy company—Heliogen—can replace the use of fossil fuels in critical industrial processes, including the production of cement, steel, and petrochemicals, dramatically reducing greenhouse gas emissions from these activities.

This singular scientific achievement was accomplished at Heliogen’s commercial facility in Lancaster, California.

Heliogen’s mission is to create the world’s first technology that can commercially replace fossil fuels with carbon-free, ultra-high temperature heat from the sun and to transform sunlight into fuels at scale—taking a major step towards solving climate change.

Its heat technology represents a key technical breakthrough for concentrated solar thermal. Previous commercial concentrating solar thermal systems have been designed to reach temperatures of up to only 565 degrees Celsius—useful for power generation, but insufficient for many industrial processes. Many of these processes require much higher temperatures, which have traditionally been reached through the burning of fossil fuels.

The potential impact of Heliogen’s patented technology is massive. With temperatures from its concentrating solar thermal technology exceeding 1,000 degrees Celsius, Heliogen will be able to replace the fuel that generates greenhouse gas emissions from industrial processes with solar energy for the first time. For instance, cement production—one of the industrial processes well suited to Heliogen’s technology—alone accounts for more than 7% of global CO2 emissions.

“Today, industrial processes like those used to make cement, steel, and other materials are responsible for more than a fifth of all emissions,” said Bill Gates. “These materials are everywhere in our lives but we don’t have any proven breakthroughs that will give us affordable, zero-carbon versions of them. If we’re going to get to zero-carbon emissions overall, we have a lot of inventing to do. I’m pleased to have been an early backer of [this] novel solar concentration technology. Its capacity to achieve the high temperatures required for these processes is a promising development in the quest to one day replace fossil fuel.”

In addition to industrial process heat, Heliogen’s technology roadmap calls for temperatures up to 1,500 degrees Celsius. At that temperature, Heliogen can perform CO2-splitting and water-splitting to make 100% fossil-free fuels such as hydrogen or syngas.

Heliogen is able to achieve these breakthrough temperatures as a result of its technology that uniquely uses advanced computer vision software to hyper-accurately align a large array of mirrors to reflect sunlight to a single target.

CHECK OUT: ‘First of its Kind’ Zero-Emission Geothermal Energy System in Canada May Soon Be in Your Town

The firm’s founder and chief executive officer is Bill Gross, a lifelong entrepreneur and founder of Idealab. The Heliogen team includes scientists and engineers from Caltech, MIT, and other leading institutions and is based in Pasadena, California.

“The world has a limited window to dramatically reduce greenhouse gas emissions,” said Heliogen CEO and founder Bill Gross, who is also the founder and chairman of  Idealab.

“We’ve made great strides in deploying clean energy in our electricity system. But electricity accounts for less than a quarter of global energy demand. Heliogen represents a technological leap forward in addressing the other 75% of energy demand: the use of fossil fuels for industrial processes and transportation. With low-cost, ultra-high temperature process heat, we have an opportunity to make meaningful contributions to solving the climate crisis.”