Home All News Heroes Most Influential Adult at Trinity High School? The Janitor. 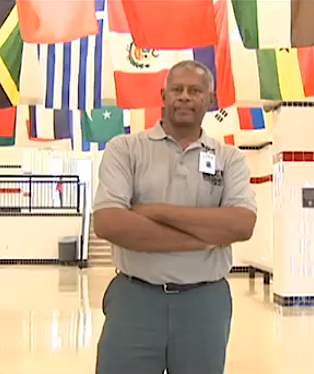 Perhaps no adult employed at Trinity High School has had more influence over students or changed more young lives than Charles Clark, the school’s custodian. Clark has mentored countless kids in need of a father figure at the Texas high school, even housing several of them in his home over the years. In the beginning, he took the custodial position thinking he would keep it until he found something better, but 24 years later, he still hasn’t found it.

Now Clark, 63, has bested more than 400 teachers, administrators and school district employees from 33 states to become the “LifeChanger of the Year” Grand Prize Winner. The national award honors outstanding educators and school district employees who make a difference in the lives of students by exemplifying excellence, positive influence and leadership.

Early on, Clark became aware that many Trinity students came from single-parent homes and lacking a father figure. Clark’s strong bond with his own dad, now 95, made him realize how important it is for kids to have positive role models and, sometimes, just someone to talk to.

“The most important thing is just talking to kids and getting them to understand what life is all about and to be responsible for themselves,” says Clark. “What is rewarding is when they come back and tell me that something I said or did 17 or 18 years ago had a positive influence on their life.

Everyone at the Euless school knows Mr. Clark for his smile, inspirational stories, and words of encouragement, but his commitment goes much deeper. Over the years Clark has purchased clothing and shoes for needy students, provided transportation to jobs, and has even taken students into his home when they needed a place to stay.

Stephanie Millar, a teacher who is now the assistant principal, has witnessed Clark’s calming attitude that allows “each student the time to talk and find ways to make better decisions.”

“Just this past weekend I witnessed a young man that Mr. Clark took under his wing and allowed to sleep at his home, graduate from college. He took him to Mississippi to see the ‘real’ life.” wrote Millar in a testimonial for the nominee. “Ryan McBean was a lost soul when he came to Trinity from Jamaica, he got into our football program and… went on to play football in college and now is in the NFL. But Charles kept on him to finish his college degree and he did!”

“When former students come back, the majority go to see Charles first,” she added.

The National Life Group, a financial services and insurance company headquartered in Vermont, recognizes ten honorees from schools around the country each year, awarding them with a personal cash prize and school donation. 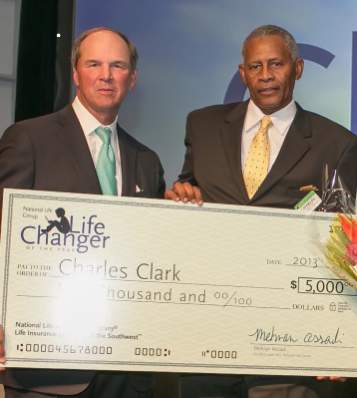 As the LifeChanger of the Year Grand Prize Winner for 2012-2013, Mr. Clark was awarded with $10,000 — half of which was donated to Trinity High School — and was invited to join the Cabot Community Celebrity Cruise in January 2014. He joined the other nine nominees for a gala banquet in Florida in March where he was celebrated as the winner.

You can nominate an educator or staff member on the LifeChanger website, here. Submit your nomination by December 31st, and your nominee will receive:  A LifeChanger of the Year 2013-14 Nominee coffee mug in a gift box; a personalized message card from you, a personalized e-Certificate and a nominee profile on the website.