Home All News USA Chase to Pay $13 Billion for Selling Bad Mortgages, $4B to Help... 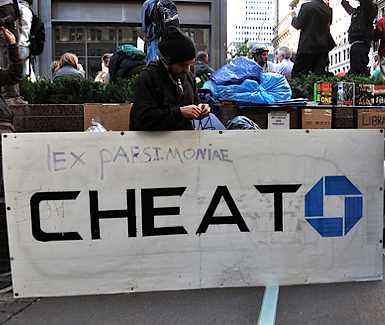 A settlement was reached in the civil suit brought by the Obama Administration’s Justice Department against JPMorgan Chase & Co. regarding wrongdoing that led to the housing collapse.

The largest bank in America will pay $4 billion to consumers who were hurt by faulty mortgage underwriting, part of a larger $13 billion fine to settle the bank’s liability in the collapse of toxic securities during the housing crisis.

“A source familiar with the settlement says that as much as $1.7 billion will go to homeowners who owe more on their mortgages than their homes are worth,” reports NPR’s Jim Zarroli. “Portions of the money will also go to restructure mortgages. And in an unusual agreement the bank will use part of the money to fight blight in distressed neighborhoods by doing things such as tearing down rundown buildings” that may have gone through foreclosure.

This settlement dwarfs the $4 billion BP was forced to pay for the Gulf oil spill.

(READ the story from NPR News)