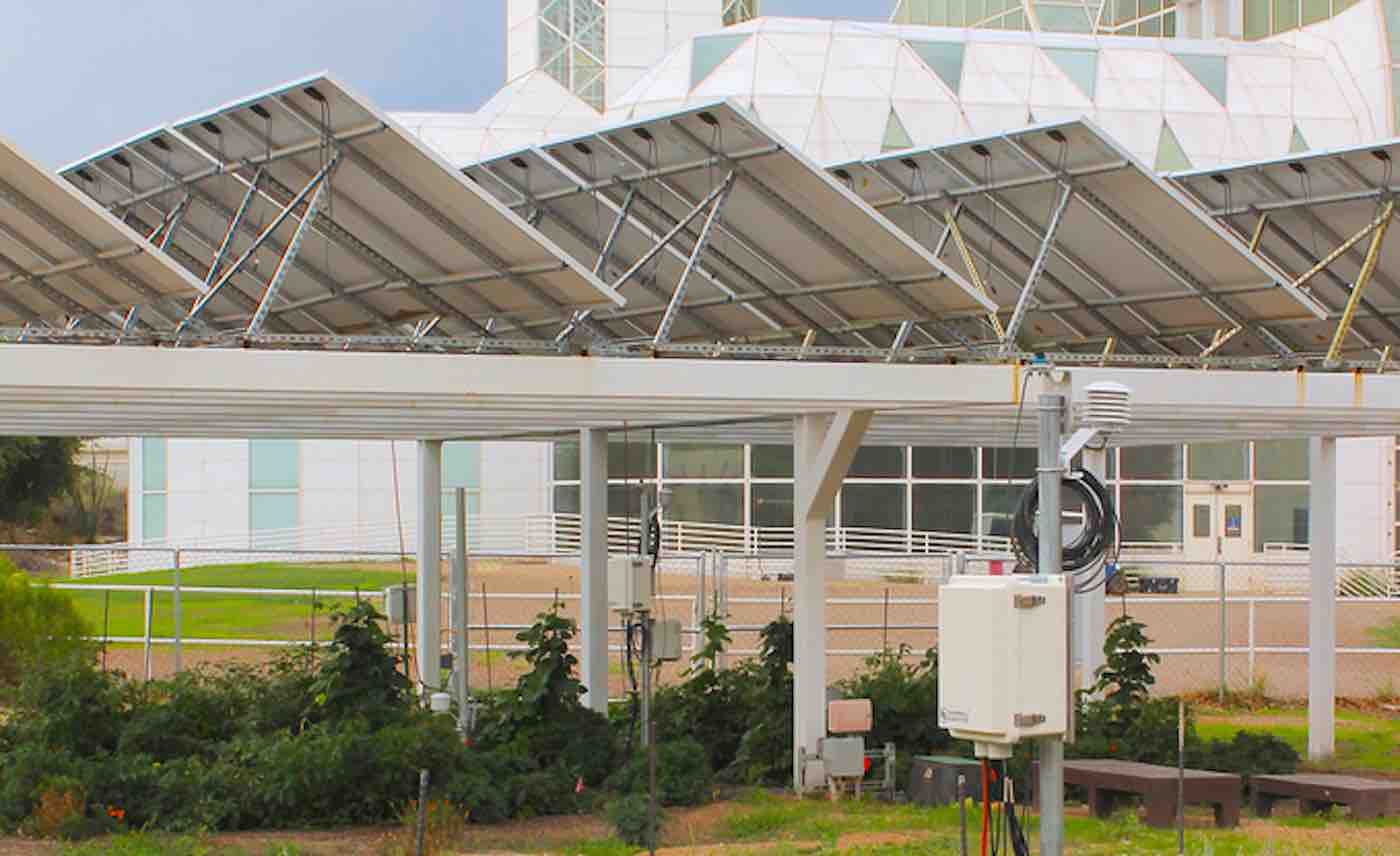 Solar panels may be able to supply us with much more than just clean energy; this new research says that it might also help crops to thrive in arid areas.

Agrivoltaics, also known as “solar sharing”, is the co-locating of agriculture and solar photovoltaic panels. The idea has been gaining traction in recent years; however, few studies have monitored all aspects of the associated food, energy, and water systems involved. Furthermore, none of this research has focused on dryland areas: regions that experience food production challenges and water shortages, but have an overabundance of sun energy.

“Many of us want more renewable energy, but where do you put all of those panels? As solar installations grow, they tend to be out on the edges of cities, and this is historically where we have already been growing our food,” said Greg Barron-Gafford, an associate professor in the School of Geography and Development and lead author on the paper that was published today in Nature Sustainability.

The University of Arizona-led research published in Nature this week found that current croplands are the “land covers with the greatest solar PV power potential” based on an extensive analysis of incoming sunlight, air temperature and relative humidity.

LOOK: This Tasty Seaweed Reduces Cow Emissions by 99%—and It Could Soon Be a Climate Gamechanger

“So which land use do you prefer—food or energy production? This challenge strikes right at the intersection of human-environment connections, and that is where geographers shine!” said Barron-Gafford. “We started to ask, ‘Why not do produce both in the same place?’ And we have been growing crops like tomatoes, peppers, chard, kale, and herbs in the shade of solar panels ever since.”

Using solar photovoltaic, or PV, panels and regional vegetables, the team created the first agrivoltaics research site at Biosphere 2. Professors and students measured everything from when plants germinated to the amount of carbon plants were sucking out of the atmosphere and the water they were releasing, to their total food production throughout the growing season.

The study focused on chiltepin pepper, jalapeno, and cherry tomato plants that were positioned under a PV array. Throughout the average 3-month summer growing season, researchers continuously monitored incoming light levels, air temperature and relative humidity using sensors mounted above the soil surface, and soil surface temperature and moisture at a depth of 5 centimeters. Both the traditional planting area and the agrivoltaic system received equal irrigation rates and were tested using two irrigation scenarios—daily irrigation and irrigation every second day.

MORE: Family Farms Use ‘Crop Mobsters’ to Prevent More Than 1 Million Servings Of Food From Going To Waste

They found that the agrivoltaics system significantly impacted three factors that affect plant growth and reproduction: air temperatures, direct sunlight and atmospheric demand for water. The shade provided by the PV panels resulted in cooler daytime temperatures and warmer nighttime temperatures than the traditional, open-sky planting system. There was also a lower vapor pressure deficit in the agrivoltaics system, meaning there was more moisture in the air.

“We found that many of our food crops do better in the shade of solar panels because they are spared from the direct sun,” Baron-Gafford said. “In fact, total chiltepin fruit production was three times greater under the PV panels in an agrivoltaic system, and tomato production was twice as great!”

Jalapenos produced a similar amount of fruit in both the agrivoltaics system and the traditional plot, but did so with 65% less transpirational water loss.

“At the same time, we found that each irrigation event can support crop growth for days, not just hours, as in current agriculture practices. This finding suggests we could reduce our water use but still maintain levels of food production,” Barron-Gafford added, noting that soil moisture remained approximately 15% higher in the agrivoltaics system than the control plot when irrigating every other day.

In addition to the benefits to the plants, the researchers also found that the agrivoltaics system increased the efficiency of energy production. Solar panels are inherently sensitive to temperature because as they warm, their efficiency drops. By cultivating crops underneath the PV panels, researchers were able to reduce the temperature of the panels.

“Those overheating solar panels are actually cooled down by the fact that the crops underneath are emitting water through their natural process of transpiration—just like misters on the patio of your favorite restaurant,” Barron-Gafford said. “All told, that is a win-win-win in terms of bettering our how we grow our food, utilize our precious water resources, and produce renewable energy.”

CHECK OUT: Minnesota Will Soon Pay for Your Landscaping Costs If You Plant Bee-Friendly Greenery

The authors say more research with additional plant species is needed. They also note the currently unexplored impact agrivoltaics could have on the physical and social well-bring of farm laborers. Preliminary data show that skin temperature can be about 18 degrees Fahrenheit cooler when working in an agrivoltaics area than in traditional agriculture.

“Climate change is already disrupting food production and farm worker health in Arizona,” said Gary Nabhan, an agroecologist and co-author on the paper. “The Southwestern U.S. sees a lot of heat stroke and heat-related death among our farm laborers; this could have a direct impact there, too.”

Barron-Gafford and the team are now working with the U.S. Department of Energy’s National Renewable Energy Lab to assess how well an agrivoltaics approach can work in other regions of the country and how regional policies can promote adoption of novel approaches to solve these pervasive problems.

Reprinted from the University of Arizona