Home All News Health Dad Develops New Treatment for Peanut Allergies With Almost No Side Effects... 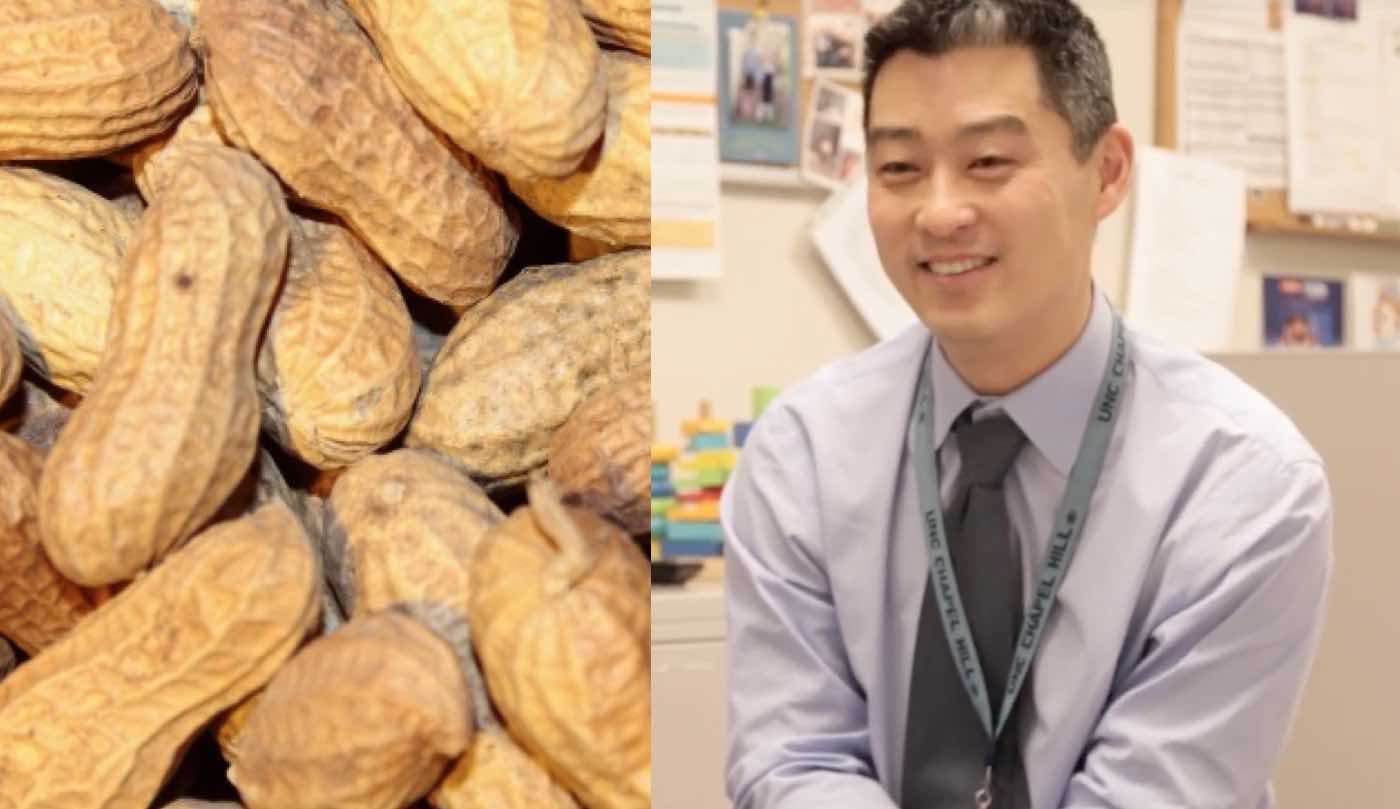 It’s called sublingual immunotherapy—or SLIT—and it involves putting minuscule amounts of liquefied peanut protein under the tongue, where it is absorbed immediately into the blood stream to desensitize the immune system to larger amounts of peanut protein.

The research, which was published in the Journal of Allergy and Clinical Immunology this week, was led by first author Edwin Kim, assistant professor of medicine at the University of North Carolina School of Medicine.

Kim was inspired to develop the treatment after his own son suffered a severe allergic reaction when he was just 9 months old. Now, his research shows that SLIT could offer people a safe and effective way to protect themselves from severe allergic reactions—and even anaphylaxis—after patients were able to tolerate 10 to 20 times more peanut protein than it would take for them to get sick.

“As a parent of two children with nut allergies, I know the fear parents face and the need for better treatments,” said Kim, member of the UNC Children’s Research Institute. “We now have the first long-term data showing that sublingual immunotherapy is safe and tolerable, while offering a strong amount of protection.”

There are three main immunotherapeutic ways clinician scientists have developed to treat nut allergies, and all of them attempt to help patients avoid severe allergic reactions by desensitizing the immune system to nut proteins. According to Kim, about 100 milligrams of peanut protein can trigger a severe allergic reaction. That’s the sort of trace amount that people fear can show up in food that has been “manufactured in a facility that processes peanuts.” For reference, one peanut kernel contains about 300 milligrams.

“The main idea beyond immunotherapy is not for kids to be able to eat peanut butter and jelly sandwiches,” Kim said. “It’s to keep them safe from the small hidden exposures that could occur with packaged foods, at restaurants, and with other food exposures.”

CHECK OUT: Bedridden for 11 Years, Man Proves the Experts Wrong By Inventing a Surgery to Cure Himself

One immunotherapy method involves a patch on the skin that releases a small amount of peanut protein through the skin to desensitize the immune system. This approach has been proven safe in clinical research, but perhaps not as effective as researchers had hoped. It could become an FDA-approved treatment.

A second approach is called oral immunotherapy (OIT), which is currently under FDA review and a decision is expected this year. OIT requires patients to ingest a small portion of peanut protein daily, and over the course of time, this can desensitize the immune system to accidental exposures. In a large phase 3 OIT clinical trial, patients initially ingested 0.5 mg of peanut and increased the amount to 300 mg over the course of many weeks and then maintained that 300 mg daily intake for the remainder of the year. This trial showed substantial effectiveness in protecting patients, but some patients suffered serious side effects. A subsequent meta-analysis of OIT clinical trial data published in The Lancet in April suggested that more clinical research on OIT was needed due to the risk of serious side effects.

A third approach is SLIT. Instead of having patients ingest peanut protein, doctors place a small amount of peanut protein under patients’ tongues, where it is immediately absorbed. Because the peanut protein avoids digestion, patients are given much less peanut protein—about 0.0002 mg initially. This amount then increases over the course of months to just 2 mg.

In 2011, Kim and colleagues—including Wesley Burks, dean of the UNC School of Medicine—conducted a small study of 18 patients to show that SLIT was safe and effective over the course of one year. Since then, Kim and colleagues followed 48 patients in the SLIT protocol of 2 mg daily for five years in Phase-2 clinical trials. In the JACI paper, the researchers showed that 67% of these patients were able to tolerate at least 750 mg of peanut protein without serious side effects. About 25% could tolerate 5,000 mg.

Kim’s data shows SLIT was about as effective as OIT, though the SLIT study was much smaller. And SLIT posed much less risk of serious side effects. The most common side effect was itchiness around the mouth that lasted about 15 minutes and did not need treatment. No one left the multi-year study because of side effects.

“SLIT participants tolerated between 10 and 20 times more peanut protein than it would take for someone to get sick,” Kim said. “We think this provides a good cushion of protection—maybe not quite as good as OIT—but with an easier mechanism (sublingually) and, as far as we can tell right now, a better safety signal.”

LOOK: Girl Makes Teddy Bears That Hide IV Bags for Young Hospital Patients—And She’ll Soon Give Them Away for Free

Kim says that the treatment is currently pending FDA-approval and it could be available to patients by the end of the year. His lab recently finished a separate SLIT study of 4 mg daily for 55 patients over the course of four years. He hopes to publish results later this year. “With sublingual immunotherapy, we hope we can maintain our safety profile while seeing an even stronger benefit for patients,” Kim said.

Kim and colleagues are also studying SLIT in a subset of children ages 1 to 4 because separate OIT data indicated these youngest patients have a stronger, more lasting benefit to immunotherapy.

“We focus on the idea there is no one perfect drug for food allergy,” Kim said. “There will have to be a lot of shared decisions between physicians, patients, and parents about what method of treatment is best for each patient. We think SLIT could be a good option for a subset of patients.”

Reprinted from the University of North Carolina School of Medicine