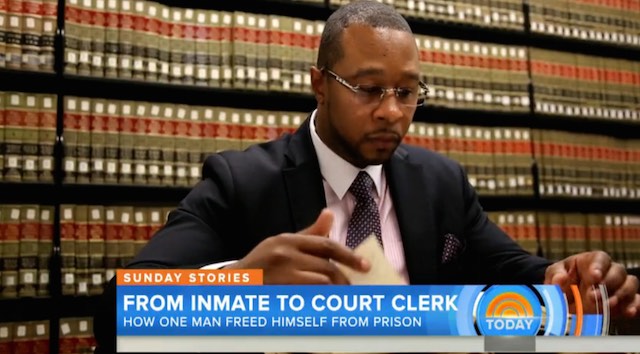 An inmate who spent nine years in prison for a crime he never committed is now clerking for a federal court after a fellow inmate told him to “stop playing basketball” and start learning law.

When he was 17 years old, Jarrett Adams was convicted of sexual assault and sentenced to 28 years in prison. He always maintained his innocence but his public defender never offered a defense at his trial in Wisconsin.

After a fellow prisoner suggested he learn how the justice system works, Adams plowed through books in the prison library, teaching himself case law. He wrote to the Wisconsin Innocence Project which took up his case and uncovered new evidence.

The U.S. Seventh Circuit Court of Appeals overturned his conviction and freed Adams in 2007 when he was 26 years old.

He decided not only to go to law school, but to work “every day until he gasps his last breath” to change the criminal justice system for the better.

His first step on that journey was graduating from law school last spring and landing the choice clerkship at the very same court that overturned his conviction in Chicago, Illinois.

He is currently awaiting the results from his Bar Exam.

(WATCH the video below from NBC News)