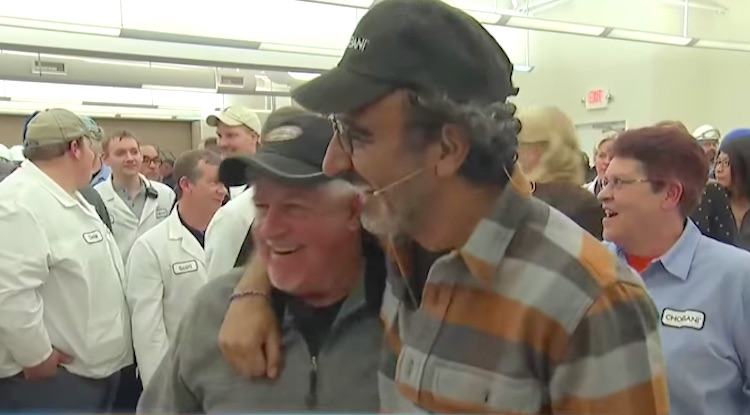 A desire to give back to the country where his overwhelming success was made possible, the boss of a yogurt empire just made more dreams possible for 2,000 of his employees at Chobani–offering them each a huge economic windfall.

Chobani’s Turkish CEO Handi Ulukaya is giving every full-time worker ownership stakes in the multi-billion dollar company. The program, “Chobani Shares”, is offering 10% of the corporation’s stock as incentive to stay and continue working.

“This isn’t a gift,” Ulukaya wrote in a letter to factory employees in upstate New York. “It’s a mutual promise to work together with a shared purpose and responsibility. To continue to create something special and of lasting value.”

Ulukaya has emphasized that the goal of the program is to pass along the wealth that he and the workers have built together. Unlike most companies, the workers at Chobani, which means “shepherd’ in Turkish, will not have to pay for the units which – if saved and used correctly – could make some of them millionaires.

RELATED: $70K Minimum Wage is Paying Off for CEO Who Took Pay Cut to Lift Workers

Since a young Ulukaya immigrated to America from a dairy-farming family and a decade later, in 2005, started the yogurt company, he has donated most of his wealth – 700 million dollars – to aiding Kurdish refugees, as well as personally flying to Lesbos, Greece to offer help during the Syrian refugee crisis. Beyond launched a foundation called TENT, he also has initiated a campaign that urges businesses to hire refugees around the world.

“I watched my mother give to those who needed and it came from the most amazing place in her heart,” Ulukaya said when he signed The Giving Pledge last year, following in the footsteps of Bill Gates and other millionaires in vowing to give away half their wealth.

“In 1994, I came to New York to study English and later became drawn to the idea that anyone can start something in America,” Ulukaya added. “All you needed was a dream and the willingness to take a risk.”

“I took a loan from the Small Business Administration, bought an old yogurt plant and brought a small group of us together to make the real, wholesome yogurt of my childhood,” he said. “Since day one, I wanted to stand for something even bigger than the natural food we made, so we have given 10% of our profits to charity through the Chobani Foundation.