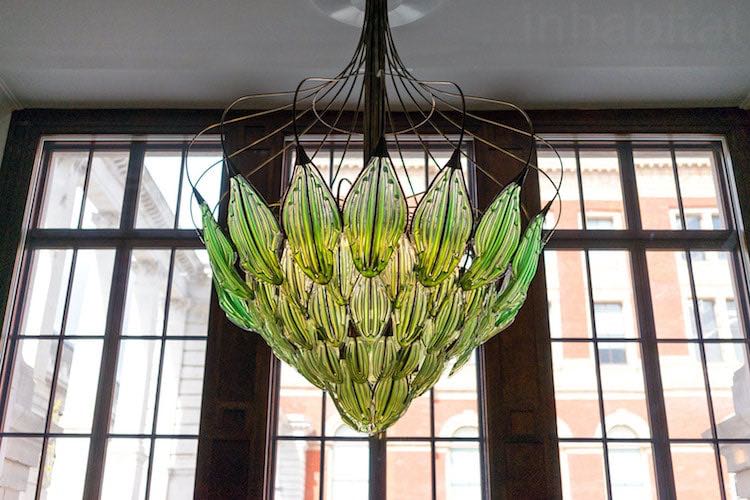 This green-tinted chandelier is not just a gorgeous lighting fixture – it also purifies the air around it.

The Exhale chandelier is the world’s first “living” bionic chandelier that uses algae to convert surrounding carbon dioxide emissions into clean oxygen. The microalgae, which are nourished by a special life-support system, are contained in the 70 glass “leaves” of the chandelier, which then cleanse the atmosphere of CO2 by using photosynthesis.

The fixture can also be installed indoors or outdoors, making it able to purify any public or private space.

The chandelier was designed by Julian Melchiorri, a London-based engineer who specializes in biochemical technology. Though the fixture is simply a prototype, Melchiorri has spent years perfecting the “man-made leaf” technology – and he hopes for the design to become a regular part of home design in the future.

“This biological process performed by the chandelier establishes and explores a new symbiotic relationship between object and people where life-giving resources are constantly exchanged, and where each other waste enables respective metabolic processes,” writes Melchiorri. “This exchange recalls how biospheric systems work, where waste ultimately doesn’t exist but is a valuable resource for other elements in that system.”

The chandelier now hangs in the Victoria and Albert Museum in London, which is the world’s largest museum of decorative arts and design.