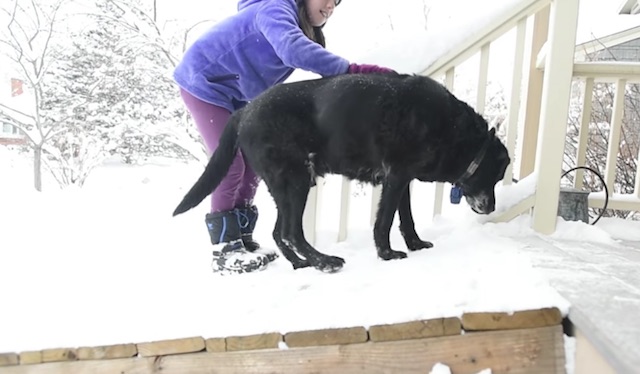 These neighborhood buddies don’t exactly fulfill the typical mailman dog relationship – in fact, they’re quite the opposite.

Every morning for the last few years, Tashi the black lab has made sure to go outside and greet his local mailman Jeff Kramer with a wagging tail. Kramer, who is an unabashed dog person, always stops to pet his canine pal in return.

Now that Tashi is 14-years-old, however, his joints have gotten increasingly stiff. In order to go up and down their front porch steps, the pooch’s owners have to pick him up and carry him by hand.

Since Kramer used to have an elderly dog of his own named Odie, he had once made a wooden ramp for him to access the porch. Odie may have passed away a few years ago, but the mailman still had all of the lumber leftover from the ramp in his backyard.

On his most recent day off, Kramer popped over to Tashi’s household and built a new ramp for the lab.

“We were literally carrying him up and down the stairs. And he weighs about 70 pounds.” Tashi’s owner, Karen Dimetrosky, told the Daily Camera. “It’s incredible. I can’t imagine not having the ramp now. It’s the only way he gets in and out.”