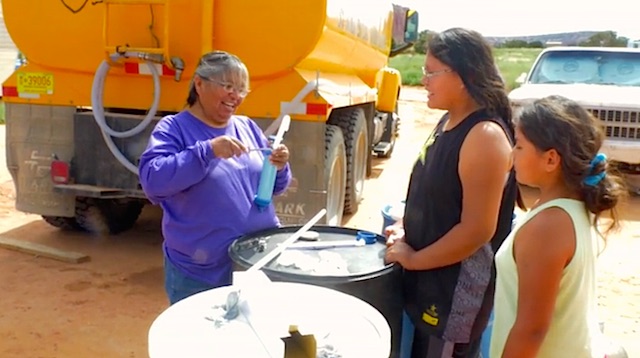 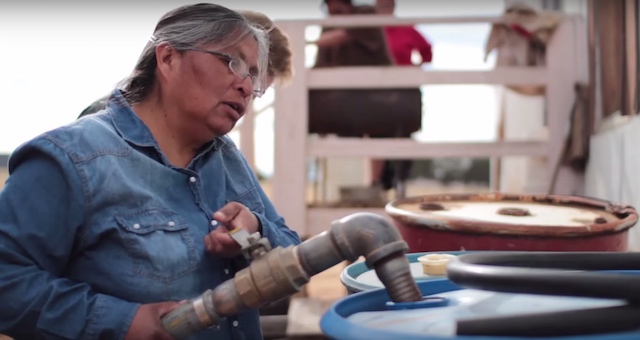 The Navajo call Darlene Arviso “the water lady,” because for six years she’s delivered this liquid luxury to families in 250 homes that lack indoor plumbing.

Arviso fills two 55-gallon blue barrels outside each home, driving across 75 miles of bumpy, unpaved roads five days every week to do it.

CHECK Out: Global Outpouring for Refugee Father and Child Selling Pens on Street

When the barrels are topped off, she’ll fill any other containers they have, from recycled pickle buckets to empty soda bottles.

She’s been the only driver for the St. Bonaventure Indian Mission since it started the water deliveries of water pumped from its on-site well in 2009.

The Navajo reservation in western New Mexico has been hit hard by the drought in the American west; years of uranium mining has used up much of the groundwater and roughly 15,000 people have no running water.

MORE: Teen’s Simple Question Saves a Man’s Life, Baby Is Named After Him

“You know what we do?” Georgianna Johnson, one of the people on the route, told NPR News. “‘The water truck’s coming! Get the buckets ready!’ We get all happy. Today’s the day I’m going to take a bath.”

Arviso fills the buckets, twice per month for each family, from a big, yellow tanker truck.

Good news is finally coming to the reservation, after the Christian Mission contacted nonprofit DigDeep, which was able to find clean water 1,800 feet below the surface. In the spring it will begin digging a well, and it hoped to raise enough money to pipe the water to people’s homes.

After a television segment about the lack of water was broadcast on CBS Sunday Morning two weeks ago, more than $661,000 was donated to DigDeep, giving the organization the money they need to begin piping the water into homes.

NICE: Lawyer Bought His Own Fire Truck and is Out Fighting Wildfires

Recently, the website TakePart.com and DigDeep surprised Arviso with 3,000 messages of thanks, honoring her for her commitment to the deliveries. She was surprised, but says she can’t imagine retiring.

“I can’t,” Arviso told the New York Times. “If I’m not here, who’s going to bring these people their water? Right now, I’m all they’ve got.”

Let Your Friends Drink In the Goodness, Share It…