Home All News Health The Doctor is a Clown?!? 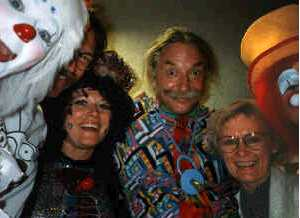 The movie, Patch Adams, was released by Universal Pictures in December, 1998. The film is based on a real-life Virginia doctor, Hunter “Patch” Adams, M.D., who has been providing humor along with free holistic health care for thousands of patients since 1971.

Understanding the healing power of laughter, Patch often arrives for appointments in a clown outfit.

For Adams, health lies not in the absence of disease, but in a “happy, vibrant, exuberant life.” Describing his profession, he says, “If you like people, if you like human interaction, medicine is enchanting. The ideal patient is an intimate friend for life… Maybe intimacy is what life is all about.” He adds, “I love people; and medicine is simply friend after friend after friend.”

”We never charged money, or carried malpractice insurance; believing that these are the horror of a modern medical practice,”said Patch Adams.  The work was supported by part time jobs. We found that the joy of practicing medicine unencumbered is so great that it is even worth paying for!

Patch helped found the Gesundheit! Institute in West Virginia. A model for solving the problems of health care delivery, the Institute is a non-profit, holistic health care community. In 1994, Patch was honored with the Institute of Noetic Sciences Award for Creative Altruism.

Now, about the movie: Described as a drama/ comedy, it focuses on five years of the doctor’s early life. It stars Robin Williams as Patch Adams, Monica Potter, and Peter Coyote. Patch was invited to spend a week with Robin and his family at their home so that Robin could study him for the role. “Robin is the actor I wanted,” said Patch. During his visit, they were two of a kind, as they roamed the hallways clowning for very sick children at U.C. San Francisco Hospital.

Tom Shadyac, the director, co-producers, Mike Farrell (TV MASH fame), and Marsha Williams (Robin’s wife), and Robin all say they want the movie to be about, “joyful, relentless service in a humorous context.” The doctor hopes the film and surrounding publicity will help raise money for the ongoing construction of the 40-bed medical facility and hospital on his 31 acres in West Virginia, and the Gesundheit! Institute, where care, not cost, will always be the only concern.

(Written by Bill Asenjo, PhD candidate, The University of Iowa)