Home All News Animals Stray Pup in Nepal Follows Mountain Climbers to The Top in Amazing... 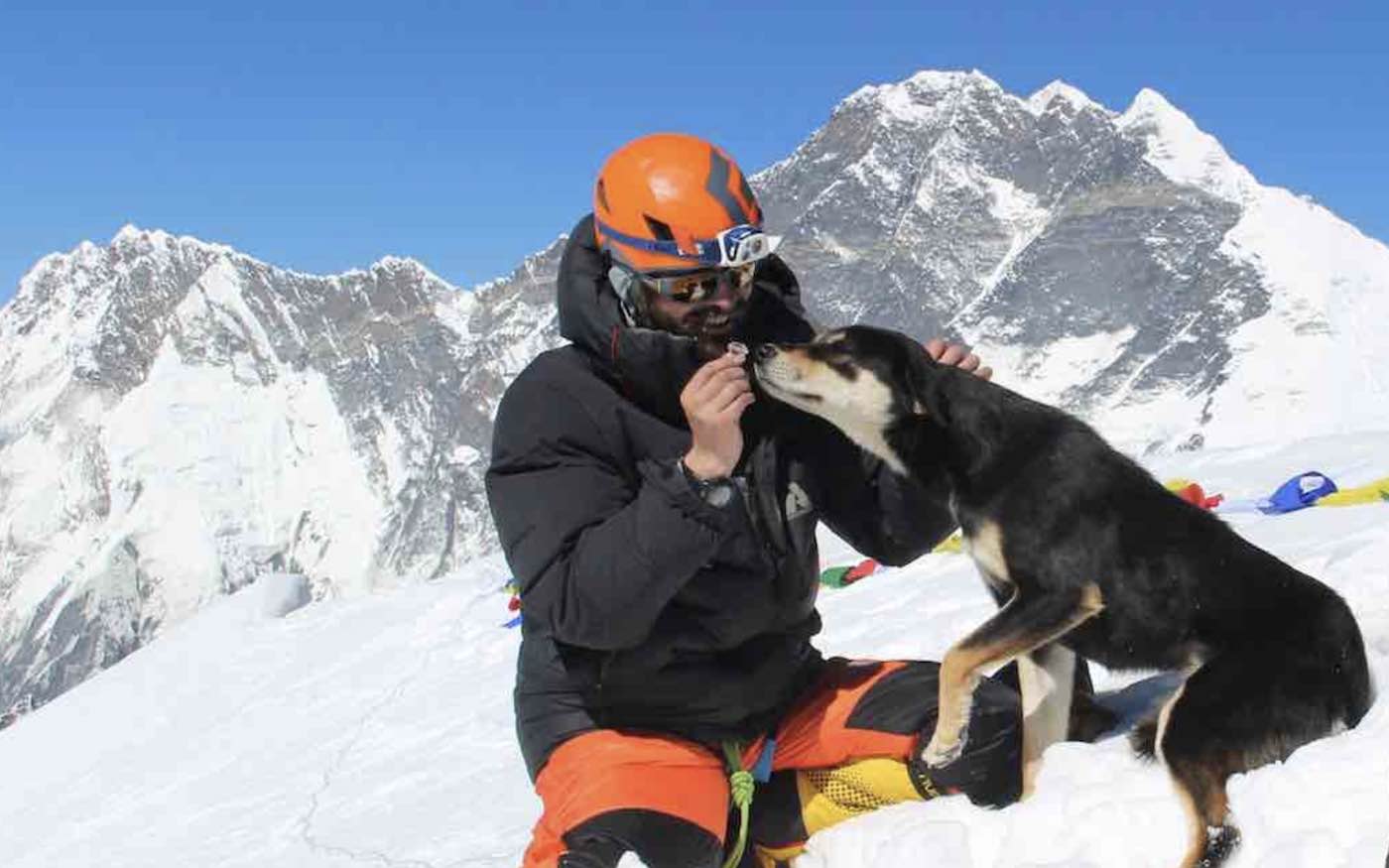 LISTEN to this tale on the radio from The Good News Guru (GNN founder), or READ the FULL story below...

After braving wind, snow, and dizzying elevations in the Himalayan mountains, this tenacious stray dog may have broken a world record without even knowing it.

The mutt in Nepal began following a group of climbers who were getting ready to scale to the top of nearby Mount Baruntse.

The Kathmandu-based peak stands just south of Mount Everest at 23,389 feet tall. Though it is a formidable climb for any experienced daredevil, the dog dubbed “Mera” completed most of the climb without any protection for her paws—or human help at all, except for a short zip line ride.

Mera was quite skittish when they first met her down in the village of Khare, so they were shocked when she suddenly bounded up next to them while they were in the midst of descending another mountain at 17,000 feet.

She’d already passed dozens of other climbers that she could have charmed—in exchange for food or attention—but mysteriously, she fixated her attention on the leader of this month-long expedition, Seattle-based Don Wargowsky.

LOOK: Traveling Baby Daughter is About to Own a World Record at 5 Months Old – and the Pictures Are Adorable

The crew spent the next two weeks hiking to the Mount Baruntse Base Camp, and Don happily shared his sleeping bag, tent, and meals with his new canine companion the entire way. They quickly became inseparable.

“I learned how to work with her despite the language barrier and discovered that she was a very intelligent animal,” Wargowsky wrote in a blog post. “She came when called, would wait outside the dinning tent while I ate, and never chewed on any of my gear.”

When it finally came time to depart from the base camp and begin their ascent up the mountain, Don knew the trek was too dangerous for a dog. Though he was heartbroken to say goodbye to his friend, he made her a leash and collar and tied her up near the camp staffers so she couldn’t follow them.

“She yelps and whines as the team and I walk away,” says Wargowsky. “Half an hour into our climb I feel a tickle on the back of my knee. I look down and see Mera following right behind me just like before.”

After days of frigid temperatures and treacherous mountain peaks, Don’s Nepalese climbing guides went from being “tolerant” of the pup to “reverent”, calling her “lucky and blessed”.

After reaching the last mountain camp before the summit, the climbing crew left Mera sleeping in Wargowsky’s tent with the hopes that she would not try to follow them up the steep climb.

Wargowsky was then stunned when he later turned around at 22,000 feet in order to take a photo of the ridge they had just climbed only to see Mera charging up to meet them.

RELATED: Girl Who Wanted to ‘Be Closer to Her Dad’ Becomes Youngest Female to Hike Mount Kilimanjaro

“We’ve been climbing for seven hours and she’s almost caught up with us,” says Wargowski. “The next thing that I know she is in my lap. I have no idea how she scaled the vertical wall of snow, but she’s with us now and keen to climb.

“I have never been so surprised or happy to see a dog in my life. The [Nepalese climbers] are absolutely stunned! They all throw their fists in the air and cheer.”

Finally after a long arduous climb, they reached the summit and took photos celebrating the first dog to ascend Mount Baruntse.

Not only that, Outdoor Magazine says that Mera may have climbed to the highest elevation ever reached by a dog in recorded history.

LOOK: Stray Dog Crashes A Wedding And Finds His Own Happily Ever After

When they arrived back into town, Don was distraught over the thought of abandoning “the world’s greatest mountain dog,” but one of his Nepalese guides was quick to offer the amazing pup a home.

Mera now receives all the meat and loving head-pats a pup could want—although she has been renamed “Baru” in honor of the mountain she conquered.